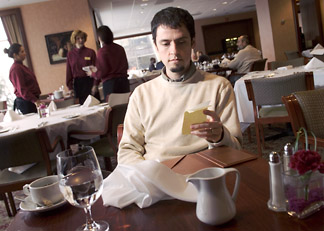 Kevin Stearns/University Photography
Psychology Professor David Pizarro, at Banfi's Restaurant on campus, found that people who read about a man who walked out on a restaurant bill remember the bill as much higher if they're told he liked to steal; people who thought he left because of an emergency remember a significantly lower bill. Conclusion: morally blaming a person can distort memory for the severity of a crime.

Viewing a person as dishonest or immoral can distort memory, a Cornell study suggests. So much so, that when we attempt to recall that person's behavior, it seems to be worse than it really was.

"In other words, our study shows that morally blaming a person can distort memory for the severity of his or her crime or misbehavior," said David Pizarro, assistant professor of psychology at Cornell.

"One week later the people who were told he was a jerk remembered a higher bill -- from 10 to 25 percent more than the bill actually was. Those who were told he had an emergency phone call remembered a slightly lower-than-actual bill," said Pizarro, the first author of a study to be published in a forthcoming issue of the journal Memory and Cognition. His co-authors include University of California (UC)-Irvine's Elizabeth Loftus, whose groundbreaking work put memory distortion on the map in the late 1980s when she showed that subjects viewing a film clip of a car accident estimated the speed of the cars differently depending on whether such words as hit, collided or mashed were used in the question.

Previous studies have found that leading questions can influence memory of an incident, and that thinking that someone is good (or bad) in one area tends to influence judgments about them in other areas.

"But this is the first study that we know of that looked at how blame might affect memory regarding objective facts, which you usually think of as less susceptible to distortion," Pizarro said. "It suggests that negative evaluations are capable of exerting a distorting effect on memory as well."

The findings have particular implications for eyewitness testimonies, Pizarro noted. "Spontaneous evaluations made by an eyewitness about a defendant may influence their memories about the event in question -- memories that often serve as the very data that judges and juries use as input into their judgments of guilt."

In addition, eyewitnesses who hear information about the moral character of a defendant, "even long after the events have occurred," may misremember the events in question, such as the severity of the crime, putting perpetrators at greater risk.

The other co-authors are UC-Irvine graduate students Cara Laney and Erin Morris.