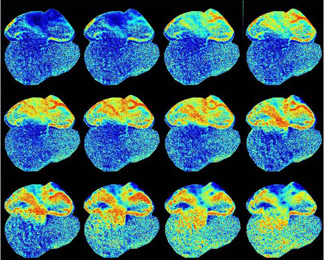 Provided by Kotlikoff et al.
This series reveals increases in cell calcium from a mouse embryo's upper heart through the lower heart on day 10 of development. Cell calcium rises when muscles contract. The bottom row shows a dramatic slowing of the conducted calcium wave between the upper and lower heart chambers.

Cornell researchers have genetically engineered mice whose hearts glow with a green light every time they beat. The development gives researchers insights into how hearts develop in living mouse embryos and could improve our understanding of irregular heartbeats, known as arrhythmias, as well as open doors to observing cellular processes to better understand basic physiology and disease.

The technique for making living, functional cells fluoresce, or glow, when the concentration of calcium ions rise within cells, is described online at http://www.pnas.org/papbyrecent.shtml and is to be published in a future issue of Proceedings of the National Academy of Sciences.

"The proteins act as molecular spies that tell us what is happening within cells in the living mouse," said Michael Kotlikoff, professor and chair of the Department of Biomedical Sciences at Cornell's College of Veterinary Medicine.

Cornell researchers are breeding new lines of mice with similar proteins that target neurons in the brain, in parasympathetic nerves, in blood vessels or in Purkinje fibers, which prompt the heart's ventricles to pump. The researchers have also transplanted cells from the mice with glowing hearts into normal mice to see whether the transplanted cells function normally within the host heart, which could offer insights for heart repair.

In the study, the mouse was engineered to express a specially designed molecule that fluoresces when calcium, which increases dramatically with each muscle contraction, is released in heart cells. Co-author Junichi Nakai of the RIKEN Brain Science Institute in Wako-shi, Japan, developed the fluorescent molecule by modifying a green fluorescent protein (derived from bioluminescent jellyfish) and making it glow brightly enough to be observed in the working heart.

Calcium turns the sensor molecule off and on like a molecular switch. Greater fluorescence indicates higher calcium levels, and the sensor shows the patterns, rate and force of heart contractions.

Since the mouse heart beats approximately 6 to 10 times per second, imaging requires a special high-speed camera that is cooled to minus 90 degrees Celsius (minus 128 Fahrenheit), reducing "noise" for a sharper image. Co-author Guy Salama of the University of Pittsburgh contributed the optical imaging work.

Using this technique, the researchers were able to track the embryo's developing heart to glean insights into how the heart forms. In mammals, the heart is the first organ to function and starts beating prior to its full development.

"We knew that the heart starts to pump at around 9.5 days," said Kotlikoff. By day 10.5, there are only two chambers (rather than four chambers in an adult mammal): an atrium on top and a ventricle on the bottom. A delay in beats between the two gives the atrium time to contract and push blood through the heart, but the mechanism that controls that signal, the atrio-ventricular node (AV node), doesn't develop until day 13. Nobody knew how the heart coordinated the pumping without this key component.

"We knew there had to be a delay in this, but we had no idea how it occurred," said Kotlikoff.

Using the new technique, which tracks the rise of calcium as the heart muscle contracts, the researchers discovered a layer of specialized cells on the surface of the developing heart that delays the beating between the upper to lower parts of the heart. After 13.5 days of development, the two portions of the heart separate into four, and there is a functional AV node. By that time, the technique revealed, the specialized cells have died so that functions are not duplicated.

"These cells have to die, because if they didn't the heart would not function properly," said Kotlikoff.

The study was funded by the National Institutes of Health and Japan's Ministry of Education, Culture, Sports Science and Technology.