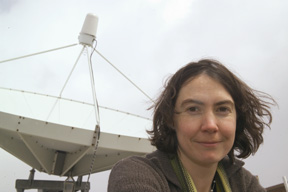 Robert Barker/University Photography
Rachel Bean gets just a little bit closer to the cosmos on the roof of the Space Sciences Building. Copyright © Cornell University

Looking back 13.7 billion years, astronomers have collected data that tells us, with greater precision than ever before, what happened in the first two-trillionths of a second after the big bang. The data agrees very well with theoretical predictions and may tell us something about the way the universe is behaving today, particularly why it is expanding faster than it ought to be.

"Observation is helping us constrain the theories," said Rachel Bean, Cornell assistant professor of astronomy, who is both a cosmology theorist and a member of the Wilkinson Microwave Anisotropy Probe (WMAP) team, which on March 10 released a high-resolution picture of the cosmic microwave background radiation (CMB), a sort of signature of the big bang. 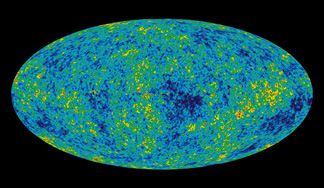 Copyright © Cornell University
A map of the cosmic microwave background of the universe as detected by NASA's WMAP satellite. The uneven distribution is believed to reflect the distribution of the very first particles formed after the big bang.

For cosmologists in general, the WMAP data confirms a widely held theory called the Lambda-CDM (cold dark matter) model, a mathematical description of how the big bang might have played out. For Bean, it throws light on her efforts to explain "dark energy." Recent observations of supernovae suggest that the expansion of the universe is not just "coasting" from the big bang, but that the expansion is accelerating. Some unknown energy source is exerting a force contrary to gravity. Theorists postulate a cosmological constant -- a fundamental property of space -- or something called quintessence -- a sort of energy field.

There is a possibility, Bean said, that the force that drove the initial expansion of the universe may be related to the force that now seems to be causing the expansion to accelerate. "The same force but with a different particle," she cautioned. 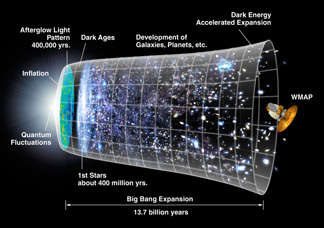 The plasma wasn't uniform. If it had been, we wouldn't be here. There would have been no irregularities to cause stars and planets to coalesce. Fortunately, the inflatons experienced quantum fluctuations. Quantum physics allows particles to wink out of existence here and pop up over there. The appearance of the primordial, point-sized universe in the first place is considered to be a quantum fluctuation on a grand scale. So the inflatons became unevenly distributed, and when they decayed they made an uneven plasma.

About 400,000 years later -- an eyeblink in universe time -- the universe had expanded and cooled enough for electrons and protons to form hydrogen atoms without photons crashing into them and knocking them apart. Photons readily interact with electrons but hardly ever with neutral hydrogen, so once atoms formed, the primeval light was able to travel unhindered through the universe.

That radiation was uneven, too, varying in intensity in proportion to the density of the places from which it had originated, a variation that was just an expanded version of the original quantum fluctuations. Imagine a balloon made of poorly formed rubber, thicker in some places than others. As the balloon blows up, all the rubber will stretch, but it will still be thicker and thinner in the same relative locations.

Faint echoes of that original radiation still permeate the universe, and for three years the WMAP satellite has been scanning the sky for them. By averaging the data over that long a time, researchers have been able to filter out interference from our local galaxy and from noise built into the instruments to provide a higher-resolution picture than ever before of the cosmic background.

A Fourier analysis -- a mathematical method that finds the regularities in a complex signal -- is revealing the principles behind the lumpiness of the early plasma. The WMAP satellite also collects data on the polarization of the CMB, which tells something about the way photons were scattered in collisions with electrons, both in the beginning and later, when stars were forming. In this way, Bean said, the subsequent expansion of the universe has left a signature on the radiation passing through it.

Among other conclusions, the new data confirms the age of the universe at 13.7 billion years and says that the universe is almost "flat" (that is, space is only curved a bit through a higher dimension). As for dark energy, Bean said the results are consistent with the simplest theory, a "cosmological constant" representing a fundamental property of space, meaning that dark energy has the same value at every point in space and time.

"Up until the 1990s," Bean said, "cosmology was mostly abstract. But now we have exceptional observational constraints to test the theories." She's involved in the experiment, she said, because "It's the responsibility of theorists to understand how the observations were made, how the precision is achieved, where the errors can be."