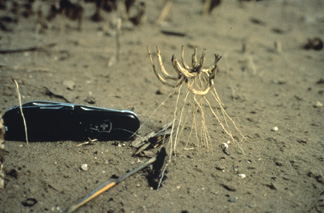 Around the world, soil is being swept and washed away 10 to 40 times faster than it is being replenished, destroying cropland the size of Indiana every year, reports a new Cornell University study.

Yet the need for food and other agricultural products continues to soar.

Plenty of people should be, stressed Pimentel, whose study on the food and environmental threat of soil erosion is published in a recent issue of the Journal of the Environment, Development and Sustainability (Vol. 8, 2006)."Soil erosion is second only to population growth as the biggest environmental problem the world faces," said David Pimentel, professor of ecology at Cornell. "Yet, the problem, which is growing ever more critical, is being ignored because who gets excited about dirt?"

"Erosion is a slow and insidious process," stressed Pimentel. "Yet, controlling soil erosion is really quite simple: The soil can be protected with cover crops when the land is not being used to grow crops."

Other ways to reduce erosion include reducing the need for people in developing countries to clear forests for agriculture, overgraze their cattle and remove crop residues for cooking fuel.

The vast majority -- 99.7 percent -- of human food comes from cropland, which is shrinking by more than 10 million hectares (almost 37,000 square miles) a year due to soil erosion, Pimentel reports, while more people than ever -- more than 3.7 billion people -- are malnourished.

"Erosion is one of those problems that nickels and dimes you to death: One rainstorm can wash away 1 mm (.04 inches) of dirt. It doesn't sound like much, but when you consider a hectare (2.5 acres), it would take 13 tons of topsoil -- or 20 years if left to natural processes -- to replace that loss," Pimentel said. "And that kind of loss occurs year after year by wind and rain around the world."

The study, which pulls together statistics on soil erosion from more than 125 sources, reports: