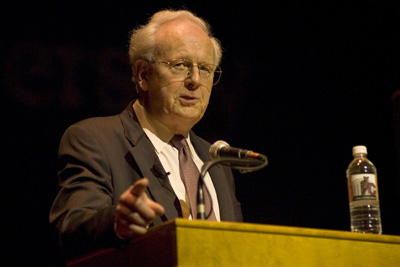 But to find in one person, Walter LaFeber, the greatest of scholars and of teachers, he continued -- that is a remarkable thing.

Nearly 3,000 people -- former students, friends of former students, colleagues and friends -- filled the historic, gilded Broadway theater April 25 to hear a farewell lecture by LaFeber, the Andrew H. and James S. Tisch Distinguished University Professor, a man they have all known as such a person since he arrived at Cornell in 1959. Indeed, his lecture, "A Half-Century of Friends, Foreign Policy and Great Losers" -- delivered without notes -- drew a crowd to rival that at any rock concert.

Originally the event was to be held in the American Museum of Natural History, also on the Upper West Side. But such was the overwhelming demand for tickets from former students and friends, that the lecture was shifted to the theater.

Many of those attending won't forget LaFeber's performance, as they haven't forgotten his past lectures, many of which also ended in standing ovations. LaFeber's students simply do not forget him. And the reason may be, in part, because he does not forget them. "Cornell alumni, in a variety of ways, are truly extraordinary people," he told his admiring audience.

Consider Christopher Muenzen '77 and Paul Shang '78, former roommates who stumbled upon each other at the farewell lecture for the first time in 29 years. Sitting together near the front of the theater, Muenzen and Shang came to hear the professor they both remember as the teacher who inspired them to study history. 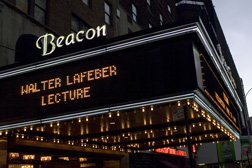 LaFeber was Shang's adviser. "I just remember Walt as being the nicest, gentlest, most patient person," said Shang, now an investment banker. Recently he had dinner with his old adviser and mentioned that he had lost touch with Muenzen. A few days later, purely by coincidence, Muenzen, now a physician, sat in on a lecture by the professor he hadn't seen since 1977. LaFeber immediately recognized him in the audience.

"It's a testament to Walter LaFeber that when I saw him for the first time, 29 years after graduation, the first thing he said to me was, 'I just saw your roommate a few days ago. He was asking about you,'" said Muenzen.

"For a man of such talents, he was tremendously humble," Muenzen continued. "He never seemed to forget that he was once an undergraduate, and he always understood the foibles of undergraduates. As a result of Walter LaFeber, I went to graduate school in history."

They are sentiments echoed by Wayne Jaquith '71, who waited in the snaking line outside the theater an hour and a half before the talk. And by Carrie Fishman '81, an antique jewelry dealer and attorney who remembered LaFeber for taking time to advise and guide her even while he was on sabbatical.

"Even though his classes were big, he was so personal," said Linda Stigliani O'Keefe '76. "He would come in and sit down at a desk, and no matter how you were feeling, you were captivated."

And LaFeber, who has served under the administrations of half of Cornell's presidents, continued that tradition with his lecture (not really his last, he says) on the foreign policy of Woodrow Wilson, the power of Cornell alumni and his own gratitude to friends, colleagues and students.

Commenting on what's behind current foreign policy and the expansion of democracy, LaFeber noted that in America's early days, when "intellectuals and politicians were the same people," those in power, including Thomas Jefferson and John Quincy Adams, deeply understood the nature of democracy and weren't so sure about how well democracy could travel. That changed after 1913, he said, with Woodrow Wilson, who had to shift his focus from reforms at home to dealing with the Mexican, Chinese and Russian revolutions and World War I. His decisions, LaFeber said, prompted many young, disillusioned American liberals to feel that Wilson did not make the world safer for democracy.

And again, LaFeber's lecture closed to a standing ovation. Rawlings then presented him with a thick book of compiled tributes written by the people whose lives he has changed for the better. Footnotes, perhaps, to a half-century-long career as beloved teacher, scholar and mentor.

"Thank you for the last 46 years," LaFeber said. "I appreciate them."