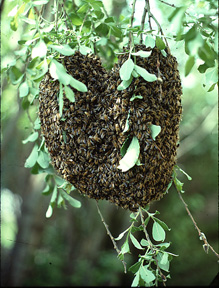 Courtesy of Thomas Seeley
A honeybee swarm bivouacs on a tree branch, waiting for scout bees to select candidate sites for a new home, deliberate among the choices and then reach a verdict -- a process "complicated enough to rival the dealings of any department committee," says Cornell biologist Thomas Seeley.

When 10,000 honeybees fly the coop to hunt for a new home, usually a tree cavity, they have a unique method of deciding which site is right: With great efficiency they narrow down the options and minimize bad decisions.

The Seeley group's study, which is published in the May-June issue of American Scientist, might well be used to help improve human group decision-making, he says.

Scientists had known that honeybee scouts "waggle dance" to report on food. Seeley and his colleagues, however, have confirmed that they dance to report on real estate, too, as part of their group decision-making process.

The better the housing site, the stronger the waggle dance, the researchers found, and that prompts other scouts to visit a recommended site. If they agree it's a good choice, they also dance to advertise the site and revisit it frequently. Scouts committed to different sites compete to attract uncommitted scouts to their sites, the researchers have discovered, but because the bees grade their recruitment signals in relation to site quality, the scouts build up most rapidly at the best site.

As soon as 15 or more bees are at any one site, the researchers found, the scouts signal to the waiting bees in the swarm that it's time to warm up their flight muscles in preparation for takeoff. Each scout does so by scrambling through the swarm cluster and briefly pressing its vibrating thorax against the other bees to stimulate them to activate their wing muscles. Once every bee has its thorax warmed to 95 degrees Fahrenheit, the swarm lifts off toward its new home. 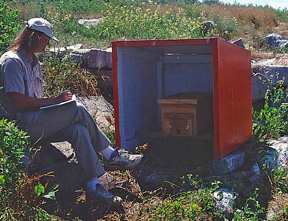 Provided
Cornell biologist Thomas Seeley counts how many scout bees visit one of the nest boxes offered by the researchers on Appledore Island, Maine, which has few trees, ensuring that the bees would focus on the provided next boxes.

"This is a striking example of decision making by an animal group that is complicated enough to rival the dealings of any department committee," said Seeley, a professor of neurobiology and behavior at Cornell and lead author of the article.

"The bees' method, which is a product of disagreement and contest rather than consensus or compromise, consistently yields excellent collective decisions," said Seeley.

When a hive gets too crowded, its queen and half the hive will swarm to a nearby tree and quietly wait while several hundred scouts go house hunting. To explore the decision-making process, the researchers conducted a series of experiments.

To study the waggle dancing for house hunting, the researchers:

To test whether the bees decide by quorum or consensus, the researchers:

To study whether bees always choose the best site, the researchers offered swarms four small and one superior site in size. Although the superior site was never the first one found, it was almost always chosen.

Whether the quorum-setting method of aggregating independent opinions could substitute for a democratic vote remains to be seen, but it sure could speed up the process toward a swift, but smart, decision, Seeley said.