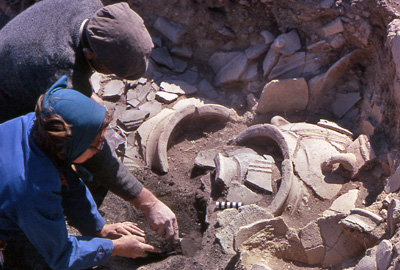 Separated in history by 100 years, the seafaring Minoans of Crete and the mercantile Canaanites of northern Egypt and the Levant (a large area of the Middle East) at the eastern end of the Mediterranean were never considered trading partners at the start of the Late Bronze Age. Until now.

Cultural links between the Aegean and Near Eastern civilizations will have to be reconsidered: A new Cornell University radiocarbon study of tree rings and seeds shows that the Santorini (or Thera) volcanic eruption, a central event in Aegean prehistory, occurred about 100 years earlier than previously thought.

The study team was led by Sturt Manning, a professor of classics and the incoming director of the Malcolm and Carolyn Wiener Laboratory for Aegean and Near Eastern Dendrochronology at Cornell. The team's findings are the cover story in the latest issue of Science (April 28).

The findings, which place the Santorini eruption in the late 17th century B.C., not 100 years later as long believed, may lead to a critical rewriting of Late Bronze Age history of Mediterranean civilizations that flourished about 3,600 years ago, Manning said.

The Santorini volcano, in one of the largest eruptions in history, buried towns but left archaeological evidence in the surrounding Aegean Sea region. As a major second millennium B.C. event, the Santorini eruption has been a logical point for scientists to align Aegean and Near Eastern chronology, although the exact date of the eruption was not known.

"Santorini is the Pompeii of the prehistoric Aegean, a time capsule and a marker horizon," said Manning. "If you could date it, then you could define a whole century of archaeological work and stitch together an absolute timeline."

In pursuit of this time stamp, Manning and colleagues analyzed 127 radiocarbon measurements from short-lived samples, including tree-ring fractions and harvested seeds that were collected in Santorini, Crete, Rhodes and Turkey. Those analyses, coupled with a complex statistical analysis, allowed Manning to assign precise calendar dates to the cultural phases in the Late Bronze Age. 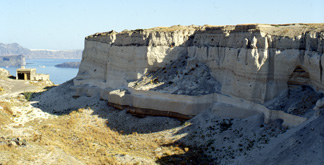 "At the moment, the radiocarbon method is the only direct way of dating the eruption and the associated archaeology," said Manning, who puts Santorini's eruption in or just after the range 1660 to 1613 B.C. This date contradicts conventional estimates that linked Aegean styles in trade goods found in Egypt and the Near East to Egyptian inscriptions and records, which have long placed the event at around 1500 B.C.

To resolve the discrepancy, Manning suggests realigning the Aegean and Egyptian chronologies for the period 1700-1400 B.C. Parts of the existing archaeological chronology are strong and parts are weak, Manning noted, and the radiocarbon now calls for "a critical rethinking of hypotheses that have stood for nearly a century in the mid second millennium B.C."

Aegean and Near Eastern cultures, including the Minoan, Mycenaean and Anatolian civilizations, are fundamental building blocks for Greek and European early history. The new findings stretch Aegean chronology by 100 years, a move that could mean alliances and intercultural influences that were previously thought improbable.

The new results were bolstered by a dendrochronology and radiocarbon study led by Danish geologist Walter Friedrich and published in the same issue of Science, which dated an olive branch severed during the Santorini eruption and arrived independently at a late 17th century B.C. dating.

This work, Manning added, continues Cornell's leading role in developing a secure chronology for the Aegean and Near East headed by Professor Peter Kuniholm, who founded the Aegean Dendrochronology Project 30 years ago. "I came to Cornell in 1976 with half a suitcase of wood. Now we have an entire storeroom with some 40,000 archived pieces that cover some 7,500 years," said Kuniholm.

Graduate student Alex Kwan is a writer intern with the Cornell News Service.