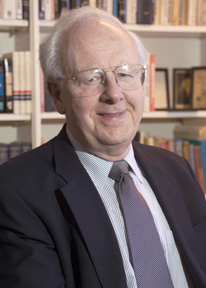 For a moment, forget Walter LaFeber's invaluable contributions to American foreign relations history, his legendary skills in the lecture hall and the respect and devotion he has commanded from students, colleagues, administrators and government policy-makers alike.

Let's focus on some of the totems in his office at 140 McGraw Hall.

Specifically the smiling portrait of Chicago Cubs legend Ernie Banks with the salutation, "Keep Going Walt," and the sign behind his desk that warns: "Chicago Cubs Fans Parking Only." Then notice that there isn't a computer on his desk (never has been, although he grudgingly acquiesced to using e-mail from a home PC a few years back). Oh sure, there are the requisite piles of books that appear to be recent reading: "The Faith of George Bush," the biography "Stalin" and "My Year in Iraq." But the eye strays to a Wrigley Field candy tin. The Cubs haven't been in a World Series since 1945. They lost.

"As someone once said, 'Anybody can have a bad century,'" says LaFeber, the Andrew H. and James S. Tisch Distinguished University Professor, who is retiring this year.

He's a historian who relishes being one of the "old school" types with a sense of humor, a warmth and wisdom grounded in the fundamentals that come from cultivating a long view, whether it be in foreign relations history or baseball.

And oh my, are we going to miss him.

"Great subjects are illuminated best by small dramas," said Glenn Altschuler, the Litwin Professor of American Studies, quoting Nobel laureate writer V.S. Naipaul. "And so it is with Walt LaFeber. Justly celebrated for his teaching and scholarship, Walt is great, truly great, in my judgment, because of the way he lives each day, unfailingly attentive to students, staff and colleagues, a 'yes man' when Cornell asks, and patient, at least outwardly, as his Chicago Cubs disappoint, year in and year out. He is Midwestern mensch -- the best thing that's happened to Cornell in the last half century." 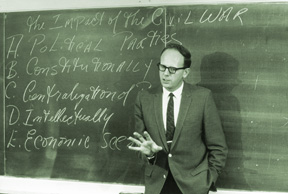 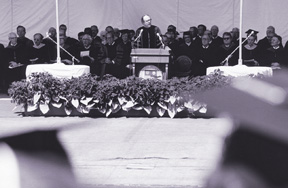 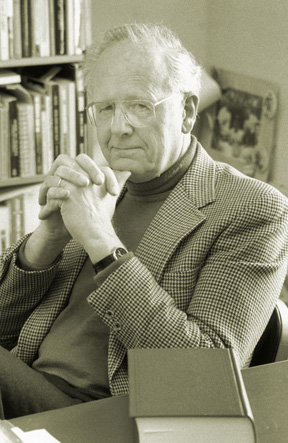 The arc of LaFeber's career spans the latter half of the so-called American century, and LaFeber often played a crucial part in that era. Born in Walkerton, Ind., he came to Cornell as an assistant professor in 1959 at age 26, just after eaning his Ph.D. from the University of Wisconsin, M.A. at Stanford University (1956) and B.A. from Hanover College (1955). He became a professor in 1967, gained the Noll Professorship in 1968 and was the first-ever recipient of the John M. Clark Teaching Award at Cornell. LaFeber has written and co-authored some 20 books, including "America, Russia and the Cold War" (1966), now in its ninth edition, and dozens of articles and op-ed pieces in major newspapers. He has been a Guggenheim fellow, is a member of the American Academy of Arts and Sciences, has lectured at dozens of universities and has appeared widely on television and radio.

His famed History of Foreign Relations class had the reputation of being one of the toughest courses at Cornell -- and one of the best, even though it was taught on a Saturday. LaFeber's method was simple: He wrote an outline on the chalkboard. and then he started talking. He often left the hall to a standing ovation -- but he never made a curtain call. He just kept walking. You'd have to catch the rest of his act next time.

"Many of us became LaFeber addicts, taking his classes, becoming history majors -- of American foreign policy, that is," said John Wolff '90. "We'd pester him to mentor our honors theses, name our fish 'Wally' and hope one day that we'd be the ones calling on him for advice from our future perches in the State Department, White House, Pentagon, CIA, NSA or from wherever it was we were going to change the world."

Several of his students went on to become such people: Tom Downey '70, former U.S. congressman, now a top lobbyist in Washington, D.C.; National Security Adviser Stephen Hadley '69; Eric Edelman '72, former ambassador to Turkey, now undersecretary of defense, to name a few. They all stay in touch with LaFeber.

He went to teaching half time in 1989 and started to phase that out in the '90s. But just when he thought he was on his way out, he got a call from President Hunter R. Rawlings (during his first administration) offering him the Tisch teaching professorship, and LaFeber went back to the lecture hall.

"The Tisch deal was a complete surprise to me," he said.

Joel Silbey, the President White Professor of History, Emeritus, and LaFeber's friendly nemesis, has shared the 140 McGraw office with the historian for 10 years. They trade barbs and argue politics and baseball -- Silbey's a San Francisco Giants fan.

"I've always been impressed by the extraordinary devotion of his students," said Silbey. "We all strive for that; he achieves it. We've always considered him to be our leader and model of what we'd like to be."

LaFeber's colleague Mary Beth Norton, the Donlon Alger Professor of American History, said, "No other member of the department has commanded the same respect as Walt in the 35 years I have known him. His integrity, humaneness and commitment to principle mean that his comments always carry much weight in department meetings. His prize-winning historical writings are powerful and influential. The [U.S.] Senate's willingness to approve the Panama Canal Treaty, for example, has with some justice been attributed to the impact of his book on the subject."

Cornell presidents have turned to LaFeber to honor historic moments as well as to draw on his wisdom in moments of national crisis. For more than 100 years the university president had given the commencement address. Cornell President Emeritus Dale Corson broke with that tradition when he asked LaFeber to give the 1976 address.

"It was the bicentennial," said Corson. "I felt that something significant should be said by someone who could say it with authority."

And it was LaFeber to whom Rawlings turned during the Sept. 11, 2001, commemoration on the Arts Quad on Sept. 14.

LaFeber said that 9/11 not only shook the nation, but resurrected foreign relations studies. The field had languished in the "narcissistic inward-looking post-Cold War '90s" and seemed to be going the way of such antiquated areas as maritime studies.

"That's all changed now. More academics are interested in foreign policy and there are more jobs opening up in foreign relations," said LaFeber.

If LaFeber was one of Cornell's go-to guys in 1976 and 2001, he says Cornell alumni were his allies during the campus crisis of 1969, when armed black students took over Willard Straight Hall. He was chair of the history department when it seemed the "university was falling apart."

"That's when I really began to appreciate the importance of Cornell alumni," LaFeber said. "People like Bob Purcell ['58] and Arthur Dean ['35] ... came here and worked to keep the place together."

He still has a lot of work to do: He's finishing the 10th edition of his classic "America, Russia and the Cold War," and he's writing essays on Colin Powell and U.S.-China relations, to name just two.

There are a lot of tributes to LaFeber, honors and accolades galore. But it is Ernie Banks who may have best expressed the general sentiment of the entire university community as LaFeber rides off into the august light of Cornell history: "Keep Going Walt."