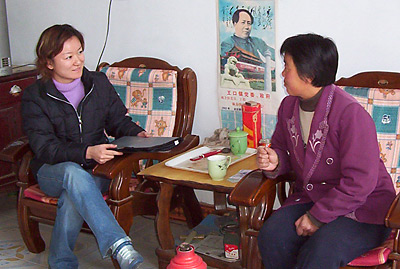 Provided
Shenghui Wang, an economist with the World Bank, interviews a Chinese cotton farmer about using Bt cotton and how much spraying was required after several years of use. Wang, who received her Ph.D. from Cornell in 2006, participated with Cornell researchers in the first study to look at the long-term impact of Bt cotton in China.

Although Chinese cotton growers were among the first farmers worldwide to plant genetically modified (GM) cotton to resist bollworms, the substantial profits they have reaped for several years by saving on pesticides have now been eroded.

The reason, as reported by Cornell University researchers at the American Agricultural Economics Association (AAEA) Annual Meeting in Long Beach, Calif., July 25, is that other pests are now attacking the GM cotton.

The GM crop is known as Bt cotton, shorthand for the Bacillus thuringiensis gene inserted into the seeds to produce toxins. But these toxins are lethal only to leaf-eating bollworms. After seven years, populations of other insects -- such as mirids -- have increased so much that farmers are now having to spray their crops up to 20 times a growing season to control them, according to the study of 481 Chinese farmers in five major cotton-producing provinces.

"These results should send a very strong signal to researchers and governments that they need to come up with remedial actions for the Bt-cotton farmers. Otherwise, these farmers will stop using Bt cotton, and that would be very unfortunate," said Per Pinstrup-Andersen, the H.E. Babcock Professor of Food, Nutrition and Public Policy at Cornell, and the 2001 Food Prize laureate. Bt cotton, he said, can help reduce poverty and undernourishment problems in developing countries if properly used.

The study -- the first to look at the longer-term economic impact of Bt cotton -- found that by year three, farmers in the survey who had planted Bt cotton cut pesticide use by more than 70 percent and had earnings 36 percent higher than farmers planting conventional cotton. By 2004, however, they had to spray just as much as conventional farmers, which resulted in a net average income of 8 percent less than conventional cotton farmers because Bt seed is triple the cost of conventional seed.

In addition to Pinstrup-Andersen, the study was conducted by Shenghui Wang, Cornell Ph.D. '06 and now an economist at the World Bank, and Cornell professor David R. Just. They stress that secondary pest problems could become a major threat in countries where Bt cotton has been widely planted.

"Because of its touted efficiency, four major cotton-growing countries were quick to adopt Bt cotton: the U.S., China, India and Argentina," said Wang. Bt cotton accounts for 35 percent of cotton production worldwide. In China, more than 5 million farmers have planted Bt cotton; it is also widely planted in Mexico and South Africa.

When U.S. farmers plant Bt crops, they, unlike farmers in China, are required by contracts with seed producers to plant a refuge, a field of non-Bt crops, to maintain a bollworm population nearby to help prevent the pest from developing resistance to the Bt cotton. The pesticides used in these refuge fields help control secondary pest populations on the nearby Bt cotton fields. Researchers do not yet know if a secondary pest problem will emerge in the United States and other countries, Pinstrup-Andersen said.

"The problem in China is not due to the bollworm developing resistance to Bt cotton -- as some researchers have feared -- but is due to secondary pests that are not targeted by the Bt cotton and which previously have been controlled by the broad-spectrum pesticides used to control bollworms," added Pinstrup-Andersen, who also is serving as president of AAEA for 2007.

Wang and her co-authors conclude, "Research is urgently needed to develop and test solutions."

This study was jointly conducted by the Center for Chinese Agricultural Policy, Chinese Academy of Science and Cornell.