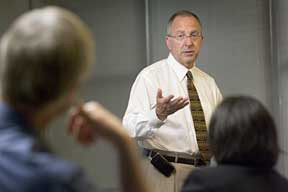 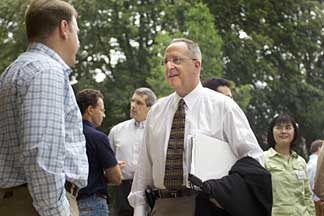 Imagine a device that could deliver perfectly targeted chemotherapy drugs to the area of the brain affected by a brain tumor, or a form of systemically injected gene therapy that could be used to treat Alzheimer's disease or autism. Consider a less invasive way of treating a brain aneurism. Or think of an implanted device that could detect the origin of an epileptic seizure

These were just a few of the ideas on the table when Weill Cornell Medical College neurosurgeons traveled from New York City to Ithaca to meet with their colleagues in Cornell's Department of Biomedical Engineering on July 20 and 21.

Closer collaboration between the two campuses was on the mind of President David Skorton when he spoke to the group on the second day. Some of the logistical hurdles involved in this collaboration, said Skorton, who has a joint appointment at the medical school and biomedical engineering department, can only be solved with dollars. His role, he said, will largely be in securing funding and in supporting specific plans worked out by faculty who know the issues best. "I think people are learning all the nuances of how things can be done," he said.

The meeting's participants declared that ties had been forged and they came away with ideas for collaborative work that could lead to the medical innovations of the future.

It's a well-timed event, said Michael Shuler, S.B. Eckert Professor of chemical and biomolecular engineering and chair of the biomedical engineering department. "Biomedical engineering is in a period of rapid growth. For us to be as competitive and successful as we can be, the interaction with the medical school has to be good."

In the past, said Phil Stieg, chair of Weill Cornell's Department of Neurological Surgery, neurosurgical devices have been developed and improved through individual collaborations between faculty members and industry. But that strategy is now sharply limited by industry's greater emphasis on profit margins and potential sales. A cross-campus collaboration with the biomedical engineering department is a natural alternative, he said, and one that will be less restricted by immediate profitability. "What we do is technology driven. We have an understanding of what's going on, but we don't have time to develop new instruments," he said. But the potential for innovation -- from improved materials for surgery that don't stick to brain tissue, to smaller endoscopes with better resolution -- is gigantic.

"It's really exciting for us to be able to collaborate in this way. The barrier has been largely geography, but I think these days it doesn't have to be," said Susan Pannullo, an assistant professor of neurosurgery.

The first thing the students learn, Wang said, is how much room there is for the development of better devices. "Almost all technology, in practice, has limitations," he said. Getting a look at how things work in clinical settings is an invaluable experience, one he hopes Cornell's current and future engineers will be able to do more often.

That means addressing some significant logistical issues, Wang added, from finding short-term housing in New York for visiting students to better integrating graduate programs that involve research on both campuses. "When students go down to Weill, they're leaving the Cornell system," he said. "They should still be considered to be in the system, getting credit."

As the meeting came to a close, Steig counted at least four solid ideas for new research in imaging, tissue engineering, and drug delivery systems. Several neurosurgeons had taken tours of Cornell labs. And a follow-up system had been agreed on to track the researchers' work. Those who have made real progress will meet again over winter break in Manhattan.

"This has gone amazingly well. It's good to see the dialogue going," said Stieg. "You can feel the energy. I'd like to see this be the first strong relationship between the university and the medical school. This was a great first effort."