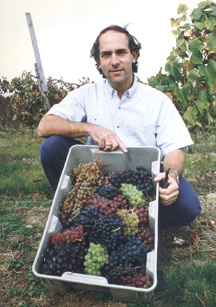 Reisch developed and tested the grapes with Thomas Henick-Kling, professor of enology at the Experiment Station and leader of Cornell's enology program.

The grapes were released at the 31st annual American Society for Enology and Viticulture/Eastern Section Conference and Symposium, held July 9-11 in Rochester, N.Y.

"Wines are free of the hybrid aromas typical of many other red hybrid grapes," Henick-Kling added. "Noiret is richly colored and has notes of green and black pepper, with raspberry and mint aromas and a fine tannin structure. The mouthfeel of Corot noir is round and heavy, and the tannins are big and a bit edgier than in Noiret," he said. Care should be taken to grow Noiret on sites less susceptible to extreme winter temperatures and downy mildew.

Reisch said that Corot noir can be used for varietal wine production or for blending. The distinctive red wine has a deep red color and attractive berry and cherry fruit aromas, the researchers said.

Valvin Muscat is a mid-season white wine grape with a distinctive muscat flavor and aroma that is desirable for blending as well as for varietal wines. The complex interspecific hybrid grape resulted from a cross in 1962 between Couderc 299-35 (an interspecific hybrid known as Muscat du Moulin) and Muscat Ottonel.

"Valvin Muscat is recommended for the production of high-quality muscat wines," said Reisch. "Vines are well suited to good grape-growing sites in the eastern United States, and should only be grown on suitable rootstocks." Some care should be exercised to control disease, and fruit should be picked when the muscat flavor reaches its peak, he noted.

"Historically, one of the unique strengths of Cornell's wine grape breeding program is the extent to which the breeders and enologists work together to select new grape crosses based on the flavor profile of the wine we are seeking to develop," said Henick-Kling. "All three of these new grapes were extensively screened and evaluated by the Cornell enology group, in the field by Bruce Reisch and by cooperators in industry wineries. It is a team effort."

With the new varieties, whose names are trademarked, the Experiment Station now has nine wine grapes to its credit. The previous Cornell releases are: Melody, Horizon, Cayuga White (grown widely throughout New York and beyond), Chardonel (now the No. 2 grape in Missouri), Traminette (quickly gaining in popularity throughout the East) and GR 7 (used in red wine blends).