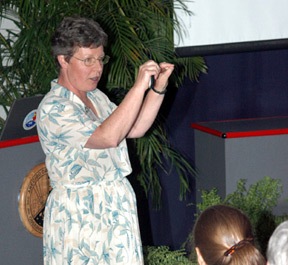 Tony Acevedo/NAIC
Jocelyn Bell Burnell speaks at Arecibo June 27 on pulsars, the process of discovery and being a female scientist in the 1960s.

In her first days as a graduate student at the University of Cambridge, Jocelyn Bell was given a set of tools. Pliers. Wire cutters. Screwdrivers.

"The message was very clear," she says: Astronomy would not be ladylike work.

To begin with, she and a few classmates would take 120 miles of wire and cable, a four-acre field, their understanding of physics and their best sledgehammering skills, and they would build a radio telescope.

Forty years later, Bell Burnell (she married soon after receiving her Ph.D.), a visiting professor at the University of Oxford, is known for her 1967 discovery of pulsars: the key to understanding such fundamental forces as gravity and the strong nuclear force. She spoke June 27 on "Reflections on the Discovery of Pulsars" at Cornell's Arecibo Observatory in Puerto Rico as the 2006 William E. and Elva F. Gordon Distinguished Lecturer.

Today, we know that the discovery of pulsars would change astronomy. And we know Bell's discovery led to a Nobel Prize for her thesis adviser, Antony Hewish, with credit to Bell, in the form of various other prestigious prizes, following later. ("I reckon I've done pretty well out of not getting the Nobel Prize," she says with a smile.)

But it all started with a plan to write her Ph.D. thesis on quasars, or quasi-stellar radio sources -- very compact, distant sources that emit extremely high amounts of energy.

"In the mid-1960s quasars had just been recognized as very distant objects," she says. "They were extremely sexy things." She and Hewish were working on the theory that quasars could be identified because their waves of electromagnetic energy become distorted by the solar wind and appear to radio telescopes as if they are scintillating. "The plan was that we would repeatedly survey the sky for twinkling sources," she says. "And they would be the quasars."

During that tedious process, Bell noticed occasional "bits of scruff" among her data. At best, she thought then, it was some kind of man-made interference; at worst, it could be faulty wiring of the telescope on her part. And then there was the unsettling possibility that beings -- which she and Hewish called Little Green Men -- were sending a transgalactic greeting.

Ruling out each of these possibilities was a painstaking process. After they'd succeeded, Bell and Hewish published their findings in the journal Nature.

They asked Hewish about the astrophysical significance of the discovery. And then they turned to Bell Burnell for the "human interest" side: her body measurements, how many boyfriends she had, if she would undo a few shirt buttons for the photos.

"They just did not know what to make of a young female scientist," says Bell Burnell. "That's just the way the world was."

Since then, Bell Burnell has studied wavelengths from gamma rays to infrared. Now, she is most intrigued by microquasars: pairs of stars, one of which is a neutron star or a black hole, that mimic quasars by inexplicably sending out intermittent, narrow jets of material. They may have a lot to teach us, she says in her brisk, cheerful Irish lilt -- "when we get round to looking. And I hope we will soon."