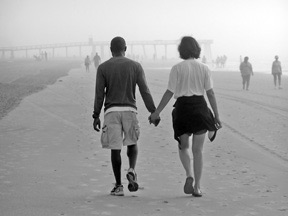 A new Cornell study finds significant variations in interracial marriage statistics among American-born blacks and black immigrants from the Caribbean and Africa.

Breaking away from previous marriage and cohabitation studies that treated the U.S. black population as a monolithic culture, a new Cornell study finds significant variations in interracial marriage statistics among American-born blacks and black immigrants from the Caribbean and Africa.

The study also found that there is a higher proportion of cohabitation among interracial couples relative to mixed race marriages, said Daniel T. Lichter, professor of policy analysis and management and director of the Bronfenbrenner Life Course Center at Cornell. "Nearly 10 percent of all cohabiting unions are between partners of different races."

The study, conducted with Christie Batson and Zhenchao Qian of Ohio State University, is published in the August issue of the Journal of Marriage and Family.

Among the study's other findings:

The study is an effort to tease out discrete factors that influence "assimilation" -- a term often interpreted as pejorative -- of minority groups into the majority population. The recent increase in interracial unions presumably reflects positive changes in American race relations and a blurring of racial and ethnic boundaries and identities, Lichter said.

However, relying on data from the 2000 census, the primary goal of the study, he said, "is to acknowledge the diversity in America's black populations, while highlighting emerging patterns of marriage and cohabitation with whites as well as other black subpopulations."

Demographers and sociologists have always treated intermarriage between groups -- blacks and whites, or between whites of different ethnic backgrounds -- as evidence of a narrowing of "social distance" between groups, Lichter said. Quantifying these relationships is a useful way to summarize the extent to which minority or historically oppressed populations -- including new immigrants -- are being economically, geographically and politically incorporated into American society and to which racial boundaries are breaking down.

"A current question is whether the new black population -- from the West Indies and Africa -- will, over time, more strongly identify with the native-born African-American population or with the majority white population," Lichter said. "There also is a growing literature on ethnic antagonisms between native-born blacks and African-born immigrants. Hence our interest in intermarriage among diverse black populations -- intermarriage reveals important information on inter-group relations."

The importance of the study comes into sharper focus when viewed in a historical context. Miscegenation laws forbidding interracial marriage were not lifted nationwide until 1967, the study states. Even so, when it comes to marriage, the color line remains strong. Despite an increase in black-white marriages and cohabitation since 1967, African-Americans "remain much less likely than American Indians, Latinos and Asian-Americans to marry whites," Lichter said.

Skin color, then, remains a powerful and mitigating factor in America's marriage patterns.