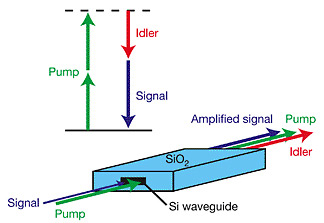 A team of researchers working with Alexander Gaeta, Cornell professor of applied and engineering physics, and Michal Lipson, assistant professor of electrical and computer engineering, used the Cornell NanoScale Facility to make the devices. They reported their results in the June 22 issue of the journal Nature.

The amplifier uses a phenomenon known as four-wave mixing, in which a signal to be amplified is "pumped" by another light source inside a very narrow waveguide. The waveguide is a channel only 300 x 550 nanometers (nm = a billionth of a meter, about the length of three atoms in a row) wide, smaller than the wavelength of the infrared light traveling through it. The photons of light in the pump and signal beams are tightly confined, allowing for transfer of energy between the two beams.

The advantage this scheme offers over previous methods of light amplification is that it works over a fairly broad range of wavelengths. Photonic circuits are expected to find their first applications as repeaters and routers for fiber-optic communications, where several different wavelengths are sent over a single fiber at the same time. The new broadband device makes it possible to amplify the multiplexed traffic all at once.

The process also creates a duplicate signal at a different wavelength, so the devices could be used to convert a signal from one wavelength to another.

Although four-wave mixing amplifiers have been made with optical fibers, such devices are tens of meters long. Researchers are working to create photonic circuits on silicon because silicon devices can be manufactured cheaply, and photonics on silicon can easily be combined with electronics on the same chip.

"A number of groups are trying to develop optical amplifiers that are silicon compatible," Gaeta said. "One of the reasons we were successful is that Michal Lipson's group has a lot of experience in making photonic devices on silicon." That experience, plus the manufacturing tools available at the Cornell NanoScale Facility, made it possible to create waveguides with the precise dimensions needed. The waveguides are silicon channels surrounded by silicon dioxide.

Computer simulations by the Cornell team predicted that a waveguide with a cross section of 300 x 600 nm would support four-wave mixing, while neither a slightly smaller one -- 200 x 400 nm -- nor a larger one -- 1,000 x 1,500 nm -- would. When Lipson's Cornell Nanophotonics Group built the devices, those numbers checked out, with best results obtained with a channel measuring 300 x 550 nm.

The devices were tested with infrared light at wavelengths near 1,555 nm, the light used in most fiber-optic communications. Amplification took place over a range of wavelengths 28 nm wide, from 1,512 to 1,535 nm. Longer waveguides gave greater amplification in a range from 1,525 to 1,540 nm. The researchers predict that even better performance can be obtained by refining the process.

They also predict that other applications of four-wave mixing already demonstrated in optical fibers will now be possible in silicon, including all-optical switching, optical signal regeneration and optical sources for quantum computing.