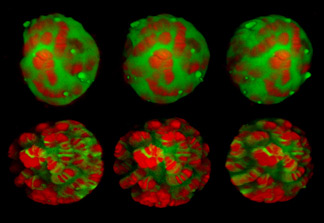 Jie Yao/Cornell
Salivary glands of Drosophila larvae contain giant polytene chromosomes whose characteristic banded structure is readily visible by light microscopy. Usually these chromosomes are visualized by breaking the nuclei and "spreading" the chromosomes in two dimensions. Using two-photon laser-scanning microscopy, these chromosomes can be examined in living salivary gland tissue in 3D and in real time with similar high resolution. This image shows a series of optical sections where the DNA is stained with Hoechst (pseudo-colored red).

Feverish fruit fly larvae, warmed in a toasty lab chamber, are giving Cornell researchers a way to watch chromosomes in action and actually see how genes are expressed in living tissue.

Using multiphoton fluorescence microscopy, a technique pioneered at Cornell by physicist Watt W. Webb, researchers have for the first time been able to watch chromosomes change their form in order to activate their genes to synthesize key proteins in fruit fly cells. The advance could be a significant step toward understanding the basic processes that underlie gene expression.

The discovery was the result of cross-disciplinary collaboration between Webb and John Lis, Cornell's Barbara McClintock Professor of Molecular Biology and Genetics. Jie Yao, who recently earned his Ph.D. at Cornell, initiated and facilitated the work.

"This technology will revolutionize the way we see gene expression in organisms," said Lis. "We're watching transcription in real time in living cells."

The research was described in the Aug. 31 issue of the journal Nature.

The team's experiments focused on gene regulatory mechanisms: specifically, what happens in a cell's nucleus when an external stimulus (heat) prompts specific genes to activate, and how those activated genes direct the production of proteins that protect the fly against the stress of heating.

"Whenever a cell is stressed -- bingo, it will produce proteins that will help the cell resist stress," said Webb, Cornell professor of applied physics and the S.B. Eckert Professor in Engineering. The process is triggered by a molecule called heat shock factor (HSF), which interacts with genes to cue the synthesis of new proteins. But this well-known process had never been seen in living cells.

The research was ultimately possible thanks to the unique composition of the fruit flies' polytene cells -- giant, multistranded chromosomes with hundreds of sets of the genome instead of the usual two sets in conventional cells. This enlarges the usual nuclear dimensions by about 10 times, making them large enough to image the detail.

The results were stunning. "Within two weeks we had spectacular pictures," said Lis. The images included pictures of the genes (hsp70 genes) that protect flies from the effects of extreme heat. By cranking up the heat, the researchers could activate these genes, and by using fruit flies specifically bred to carry fluorescent proteins on HSF, they could watch the transcription factors in action.

"This is the first time ever that anyone has been able to see in detail, at native genes in vivo, how a transcription factor is turned on, and how it then is activated," said Webb.

Using another method that Webb engineered at Cornell, called fluorescence recovery after photobleaching, the researchers also discovered that HSF activators bind to hsp70 genes much longer than previously thought before being replaced with new HSFs, which raises new questions about the mechanisms of gene transcription.

The technique also may offer a new tool for researchers across the biological sciences. Webb says it marks the success of an interdisciplinary trend that offers new potential for researchers in a variety of fields.

Better understanding transcription in lower organisms will help understand the processes in higher organisms, Yao added. "We hope to push the limits to human cells. That's the goal in the next 20 years."