The campaign got an immediate boost with the announcement by Cornell President David J. Skorton of a $10 million grant from New York state, as indicated in a letter from New York Gov. George Pataki. The money will be divided strategically between Cornell's Ithaca and WCMC campuses to further collaboration between the two and will help leverage private funds to be raised through the campaign. 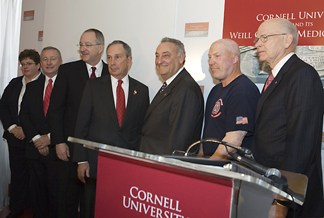 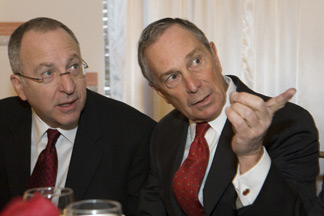 Making the campaign's five-year, $4 billion goal official, Skorton declared, "We are today announcing the largest philanthropic campaign in the history of New York's land-grant university and among the largest ever attempted by an institution of higher education."

Of the campaign's $4 billion goal, Weill Cornell aims to raise $1.3 billion, said Board of Overseers Chairman Sanford I. Weill, the retired chairman of Citigroup. That goal follows a nearly three-and-a-half-year earlier phase that raised $750 million for the medical school and paid for, among other things, a new ambulatory care center.

"I think the most important thing about this campaign is the collaboration that we're going to have with the clinical researchers here in New York City at Weill Cornell and the basic researchers up in Ithaca," Weill said. He called this collaboration "translational research."

Illustrating the already increasing connections between Ithaca and Weill Cornell, assistant professor of research in surgery Suzanne B. Schwartz and Hua Song, a doctoral student in fiber science, discussed the artificial skin invented by Cornell researchers that is changing the way burn victims are treated. The creation of this "living bandage" is the result of an ongoing research partnership between C.C. Chu, a biomedical engineer in the Department of Fiber Science and Apparel Design in Ithaca, and Roger Yurt, a surgeon at the New York Presbyterian/Weill Cornell William Randolph Hearst Burn Center.

The presentation by Schwartz and Song was followed by a heartfelt testimonial from New York City firefighter Steve Halliday, who suffered third-degree burns over more than half his body in 2002.

In a quiet tone, Halliday heaped praise on Weill Cornell, where he was treated in the burn unit. Last summer, Halliday participated in three triathlons and attributed his healing to the care he received at Cornell.

In allocating campaign funds, Cornell intends to increase its financial aid to all deserving students, whether graduate, undergraduate or professional, to the tune of about $640 million. At least $1.885 billion is earmarked for faculty and program support, largely because of the large number of faculty retirements expected over the next 10 years. And, about $1.175 billion of the campaign goal is slated for building state-of-the-art research and teaching facilities and maintaining or upgrading existing buildings on campus.

Finally, the campaign includes a goal of $300 million in unrestricted support for flexibility in maintaining future needs.

Bloomberg, who expressed appreciation for the work of WCMC, called the campaign "unique and well-timed." He joked with Weill, ribbing him for his relentless talents at fund raising.

"Saying 'no' to Sandy is virtually impossible. … I will take every lesson I've learned from Sandy and turn it right back on him," Bloomberg said, noting that he had just returned from a World Trade Center Memorial fund-raiser.

"So the 241 miles will in essence disappear, and these physicians and scientists can work shoulder-to-shoulder," Skorton said.