Cornell launched the public phase of its multibillion-dollar capital campaign today. Cornell President David Skorton recently sat down with Cornell Chronicle editors to talk about his expectations for the ambitious fund-raising effort.

Both you and Charlie Phlegar [vice president for alumni affairs and development] are new to Cornell. Do you consider this an advantage or disadvantage as you head into the public phase of the campaign?

I believe it's largely an advantage. Cornell's excellence is well known to both of us. I've had colleagues at our Ithaca and New York City campuses for decades. But our newness permits us to bring an external perspective and a new look at a fine university with great opportunities. The disadvantage, of course, is the lack of familiarity with the details of what's going on in the colleges and units. The deans and other leaders have been hugely generous with their time, as have alumni, staff and students. I am a Cornellian.

Could you describe your previous experience with the campaign at the University of Iowa, and if your background in medicine as well as the arts and humanities makes you a particularly good salesman?

In terms of whether I'm a good salesman, only time will tell. My dad, who was a Russian immigrant, raised me in a family mom-and-pop shoe business. I worked my way through college selling shoes, playing in a band and borrowing money. If I have any sales capabilities, it's derived from growing up with my dad and working in a shoe store and learning how to match customers' needs with what we had to offer. 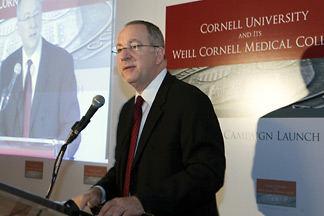 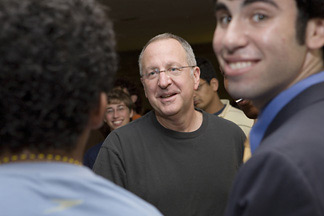 On previous fund-raising experience, I was president of the University of Iowa for the latter half of the largest campaign ever by a university in the state of Iowa, which was just over $1 billion. I was part of the senior university administration as vice president for research and part of planning the entire campaign, starting the campaign and executing all aspects of it. I feel that past experience in the trenches, so to speak, will stand me in good stead. Plus, I love the people-to-people interactions and communications that are the core of fund raising.

What percentage of your job as president will be related to fund raising for the campaign?

My whole job is about communication, and large portions of that lead to success in fund raising. I think it's very hard to define an exact percentage. I'll be traveling out of Ithaca perhaps a third of my time, but some of that will be for reasons other than fund raising, such as trying to knit our campuses closer together. All communications about our capacities and challenges and all efforts to connect with alumni and friends are part of the relationship building that leads to fund-raising success.

Many colleges and universities are in the midst of launching campaigns, seemingly all with similar goals. How can Cornell distinguish itself from other universities also trying to raise money?

First, we have to be very grateful to the alumni and friends of the university for decades of being extraordinarily generous, making Cornell among the best-supported universities in the world.

Second, a relatively small number of universities have had the support of alumni and friends to launch campaigns in excess of $1 billion. What separates Cornell, and what makes it not just unusual, but actually unique, is the public-private nature of the school: the fact that we're a distinguished Ivy League university that has a formal public mission, the land-grant mission. And it has been said that Cornell is the land-grant university to the world -- I certainly agree and am proud of this.

Iowa being a Big Ten school must have some enormous advantages in alumni fund raising because of the excitement that a winning team engenders. What are the differences in leading a campaign at a Big Ten school, versus at Cornell, and how do you make up for those differences?

Well, first, Cornell has a terrific, proud history of athletic accomplishments, including nine Ivy titles last year. And we obviously have enormous alumni enthusiasm for the university. At every university, the athletics program is a vital interface between many of the alumni and the university and this is true for Big Red athletics, too.

The particular sports at which teams excel were different in Iowa. Iowa is a state with no major league professional sports teams. It's a different kind of environment, where high school and college sports loom a bit larger. But I think there are many more similarities than differences, and I think that the spirit of Big Red or the Hawkeyes is of common character.

What are your top priorities for the campaign, and how do they relate to your vision for Cornell?

Issues of student access across socio-economic, racial and international boundaries are looming larger than ever. So one major goal is to be supportive of the students who choose and are qualified to enter Cornell. We don't want the doors to be closed by financial and other types of barriers. Student support is number one.

Number two is the retirement of the generation of faculty my age and older over the next decade. That's going to be a challenge and an enormous opportunity for Cornell to develop the next generation of academic leaders: teachers, discoverers, researchers, composers, scientists, artists, doctors, you name it. In that context we are very focused and strategic about recruiting faculty and making sure we are not complacent, for example, about gender equity in our science and engineering faculties.

Finally, in the facilities area, many of our buildings were built in an earlier era, for an earlier style of education, research and discovery. We owe it to our current and future students, and to the faculty, to have facilities that reflect the most modern views on pedagogy, research and creative activity. We need to make sure we not only build beautiful new structures that are very functional, but that we renew buildings that are still functional and beautiful and to which all Cornellians connect across generations.

The biggest idea is making sure access to education is not limited by socio-economic barriers, and permitting tomorrow's young people to realize a Cornell education and thereby transform the world. I can't focus enough on the importance of access to education. Replacing as much as a third of our current faculty will surely also transform Cornell and our capabilities.

In terms of what will result from the good work of those students and those faculty: Cornell helps to feed millions by agricultural initiatives and the application of science in many places in the world. So one immense transformational effect that Cornell has already had on the world for decades is the possibility of reducing hunger, one of the biggest problems in the world right now.

Second, the presence of such superb engineering and other science expertise on this campus, in everything from energy systems to water systems, will be able to solve another major set of problems contributing to numbing poverty around the world.

Third, the juxtaposition of medical care, training and discovery in medical fields at Weill Cornell, with the broader areas of physical and biological sciences present in CALS [College of Agriculture and Life Sciences], Arts and Sciences, the College of Veterinary Medicine, Engineering, Human Ecology and other areas, will set us up to have the scientific and policy expertise to come up with ideas to actually solve real-world problems in health care. Combining these last three items about which we've spoken, Cornell can transform the world by affecting hunger, poverty, energy use, water systems and health care, in addition to other areas.

To what extent is the forging of a closer relationship between the Ithaca and New York City campuses an important part of the campaign?

It's a hugely important part of the job we have to do and, therefore, an important part of the campaign. We have the modern world of science, prevention and diagnosis and treatment of disease, whether it's in an animal, a human or a crop. Those areas that have to do with animal and plant science are represented at the very top of their fields on the Ithaca campus. Those that have to do with human health and disease are concentrated at Weill Cornell. Weill Cornell and NewYork-Presbyterian Hospital together are one of the most potent and effective patient-care systems anywhere in the world. And Weill Cornell is emerging as a world leader in basic and clinical research.

Now that we're at the point where we understand enough about life processes in health and disease, it's time to bring the basic and applied life science going on in Ithaca together with the knowledge of human health and diseases resident at Weill Cornell. I know of no other campus that has this amount of distinction in computer science, applied math, physics, the physical sciences, engineering, basic life sciences, agriculture, animal medicine, human health and medicine, all in the same organization. It's actually a thrilling prospect for me and for the world.

How do you sustain a donor base's excitement during this five-year public phase of the campaign while avoiding donor fatigue?

If there's any evidence of donor fatigue at this university, I haven't seen it. Cornell is always near the top of the country in alumni generosity. So I think the way we sustain people's belief that we can make transformative changes in the world is to treat our alumni and friends as adults and tell them what's going on on campus -- the accomplishments and challenges. I believe that people will be hugely energized and excited by the vision we will have laid out.