The following profiles were excerpted from the recognition program for the ceremony.

Albert "Ace" Bean: For more than six decades Bean, a third-generation Cornellian, has worked to advance Cornell, inspire other Cornellians to participate in the life of the university and encourage students in their undergraduate studies, especially in art. In his hometown of Kansas City, Mo., Bean's efforts on behalf of the university include serving as regional chair for the last Cornell campaign, serving for many years with the Secondary Schools Program, as a Tower Club committee chair and with the Cornell Club of Mid-America. Bean was named a life member of the Cornell Council in 2000 after serving three terms. 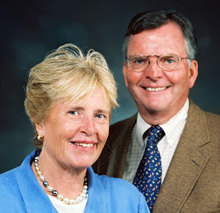 J. Thomas Clark and Nancy W. Clark: Nancy Clark has been an active member of the President's Council of Cornell Women, a three-term member of Cornell Council, chair of the Campus Life Committee and president of Kappa Kappa Gamma House Board. She received the Dean's Distinguished Leadership Award in 1997 for her role on the Human Ecology Advisory Board and Advancement Committee and has served as a class officer since graduation; she chaired her class's 15th reunion and served many years on its Major Gifts Committee. Tom Clark served on the Board of Trustees for 12 years and now serves on the Board of Overseers of Weill Cornell Medical College. He is a trustee emeritus, a presidential councillor and a lifetime member of Cornell Council. He received the College of Agriculture and Life Sciences' Outstanding Alumni Award in 2001, has served as class president and ran his 15th and 25th reunions. The Clarks were involved in the formation of the Entrepreneurship and Personal Enterprise program and are members of its Advisory Council. They co-chaired the Tower Club from 1992 to 1994.

Penny S. Haitkin: Twice a member of the Cornell Council (1983-87, 2002-06), Haitkin currently chairs the Council's Committee on Cornell's Adult University and serves on the Student and Academic Services Committee. She is past chair of the Cornell University Council's Membership Committee and has provided decades of leadership in many roles for the Class of '65. Through her long affiliation with the Cornell Alumni Admissions Ambassador Network and the its Advisory Committee, she has recruited and mentored many students. Her other involvements include serving as vice president of the Cornell Association of Class Officers, as a member of the Human Ecology Centennial Gala Committee and of the Committee on Alumni Trustee Nominations, as well as keeping active with regional Cornell Clubs.

Jay Hyman: At Cornell, Hyman has furthered wildlife medicine and facilitated the study and conservation of raptors by energetically working to create a new campus facility for this purpose. Deeply appreciative of art, he also is recognized for his dedicated efforts to strengthen the Herbert F. Johnson Museum of Art. Hyman has served three terms on the Cornell Council and was made a life member in 2001. At the College of Veterinary Medicine, he is a former member of the Advisory Council and has served on its Development Committee and Campaign Committee. He is an active leader with the Cornell Club of Eastern Florida and with the Class of '55.

Benson Lee: For more than 25 years, Lee has combined his passion for Cornell with entrepreneurship, extending Cornell's land-grant mission into technology, the inner city and the Asian alumni community. In 1979 he became the first outside member of the Cornell Research Foundation's Board of Directors and, later, was the founder of Cornell Council's Technology Transfer Committee. He also founded the Cornell Asian Alumni Association, the Minority Student Recruiting Committee (in Cleveland) and the first Division of Biological Sciences Advisory Board. He was a founding member of the Johnson School's Center for Sustainable Global Enterprise, and in 1985 became the first Asian alumnus to join the Cornell Board of Trustees, where he has served on various committees. In 1995 the Cornell Asian Alumni Association named its Cornell Tradition Fellowship in his honor.

Jane Knauss Stevens: Stevens, the first woman to receive a Cornell MBA, has created numerous opportunities to blend her management expertise, her commitment to volunteerism and her dedication to Cornell. In the late 1950s, she was president of the Cornell Women's Club of Rochester and has held various leadership roles in her Class of '45, guiding her class through many special projects -- including the establishment of a Cornell Tradition Fellowship, and stairways and a wildflower garden path at Cornell Plantations. Stevens is a founding member of the Johnson School Alumni Executive Council, and she served on the Cornell Council for a number of years; she was named a life member in 2005.