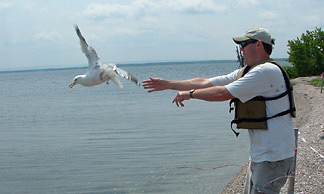 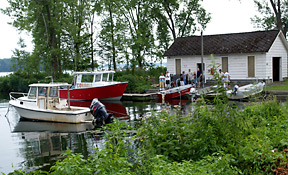 When Charles Seamans Brown graduated from Cornell almost 100 years ago in 1909, he couldn't possibly have imagined how his legacy would include an internationally renowned fisheries and aquatic research site where Cornell researchers study how invasive zebra mussels affect other species or how warmer winters expand fish populations.

It was soon transformed into the Cornell Biological Field Station (CBFS) -- a unit of the Department of Natural Resources -- and the springboard for a prolific and wide-ranging research program from studies of fish ecology and management to population dynamics, invasion biology and colonial birds. It also serves as a training ground for many graduate students and postdoctoral researchers and has hosted about 300 undergraduate interns over the past 50 summers.

"Our research program has gone from local to global in the past 50 years," said Ed Mills, professor of natural resources and director of the field station, adding that this year's $200,000 state appropriation to renovate dormitories and the recent completion of an aquatic research laboratory funded by the National Science Foundation really help put Shackelton Point on the global map.

"One of the voids in our program was that we did not have adequate experimental space," said Mills. "We are now blessed with a very nice facility." The new building offers researchers the space and precise environmental controls needed, for instance, to compare the effects of different temperatures on the development and survival of fish larvae.

The centerpiece CBFS's research is a data set, begun in 1956, that documents significant changes in the ecology of Oneida Lake over time and serves as a valuable resource for understanding large lake ecosystems and freshwater fisheries dynamics throughout the world.

But the greatest resource is Oneida Lake itself, says graduate student Jeremy Coleman, who studies the foraging behavior of double-crested cormorants and ways to manage the predatory birds. He calls it a "big bathtub" where the connections among various life forms can more readily be observed than they can be on land.

"As a terrestrial wildlife guy, I had not given much thought to the basal processes and organisms that drive lake systems, but learning and discussing these components have really helped me to understand trophic interactions [which he defines as "what eats what and how the system comes together as a whole"] and to gain new appreciation for ecology," he said.

While the lake and the life it supports remain vulnerable to climate change, pollution and biological invasion, such important fish as yellow perch, smallmouth bass and sturgeon have been making a big comeback since CBFS scientists began studying the lake.

"Despite evidence of environmental change, these are the good times for Oneida Lake," said Mills. Charles Seamans Brown would surely be pleased.