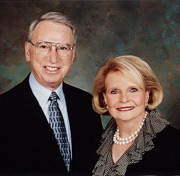 Cornell alumni Irwin '54, BEE '56, and Joan '54 Jacobs have established a $30 million scholarship and fellowship endowment for Cornell's College of Engineering. It is the largest gift pledged to date specifically for scholarships in Cornell's recently announced $4 billion campaign.

The couple's gift will provide significant support for graduate fellows in the School of Electrical and Computer Engineering, and for undergraduate Jacobs scholars in the College of Engineering. More than 30 Jacobs scholars and about 15 Jacobs fellows will be named every year.

Cornell President David J. Skorton called Irwin Jacobs "a superb scientist whose innovative spirit and business acumen have made him a leader in advanced digital wireless technology and its commercialization."

"The future of our economy in the United States is very much tied to innovation, to students studying both science and engineering and to their ability to apply their studies," said Irwin Jacobs, who founded the global wireless and voice data company QUALCOMM Inc. in 1985. "The number of students entering engineering hasn't been growing. We hope additional aid can increase the pool of students entering the field and, therefore, improve the economy."

The new fellows program will aim to strengthen the recruitment of outstanding graduate students in engineering, while the scholars program will award grants to undergraduates qualifying for financial aid and reduce their contributions to loans and work-study programs.

"We are indebted to the Jacobses for their magnificent generosity," said W. Kent Fuchs, dean of the College of Engineering. "Their fellowships and scholarships will have a profound impact on the quality and visibility of our research and graduate program, as well as on the accessibility of Cornell and our ability to attract the very best undergraduates."

The Jacobses both received bachelor's degrees from Cornell, Irwin in electrical engineering and Joan from the College of Human Ecology. Over the past 30 years, they have supported many areas of Cornell, including a dean's discretionary fund in human ecology and professorships in engineering and human ecology. In 2005 the couple were named among the country's top 25 philanthropists by BusinessWeek magazine.

Jacobs will speak on "The Incredible Cell Phone: Personal Notes on an Evolving Technology, Business Model, Applications and Global Impact." The talk is free and open to the public.

"I am delighted that his visit to campus as a Hatfield Fellow also gives Cornell an opportunity to thank him and Joan for their long-standing generosity and their most recent transformative gift," Skorton said.