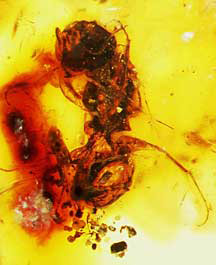 Provided
This 100-million-year-old bee embedded in amber was found in an amber mine in the Hukawng Valley, Kachin state, northern Myanmar (Burma).

The discovery of a 100-million-year old bee embedded in amber -- perhaps the oldest bee ever found -- "pushes the bee fossil record back about 35 million years," according to Bryan Danforth, Cornell associate professor of entomology.

Danforth and George Poinar of Oregon State University found the bee embedded in amber from a mine in northern Myanmar (Burma).

A report on this major fossil discovery, which the researchers say supports a new hypothesis in bee evolution, was published in the Oct. 27 issue of Science.

Scientists have long believed that bees first appeared about 120 million years ago -- but previous bee fossil records dated back only about 65 million years. Danforth and Poinar's fossil provides strong evidence for a more remote ancestry. The fact that the bee fossil also has some wasp traits suggests an evolutionary link between wasps and bees.

In a related study, published in the Oct. 10 issue of the Proceedings of the National Academy of Sciences, Danforth and several colleagues from other institutions examined early bees' structures in combination with bee DNA, producing the largest molecular and morphological study to date on bee family-level phylogeny -- the evolutionary development and diversification of a species. Their goal was to examine the early evolutionary pattern of bees and how their evolution relates to the evolution of flowering plants. Flowering plants are among the most diverse organisms that have ever existed -- Charles Darwin called their origin and diversification an "abominable mystery."

More than 16,000 species of bees, organized into seven families, are known to exist. But scientists disagree on which family is the most primitive. Bees are known to affect plant evolution by spreading pollen and preferring to pollinate some types of plants over others. Because scientists assume that bees have essentially always been around, pollinating plants and "creating" new species, it has been a mystery why the bee fossil record only dated back about 65 million years.

Until now, many researchers believed the most primitive bees stemmed from the family Colletidae, which implies that bees originated in the Southern Hemisphere (either South America or Australia). However, the work of Danforth and his group suggests that the earliest branches of the bee's evolutionary tree originate from the family Melittidae. That would mean that bees have an African origin and are almost as old as flowering plants, which would help explain a lot about the evolutionary diversification of these plants.

Sara Ball is a science writer intern at the Cornell Chronicle.