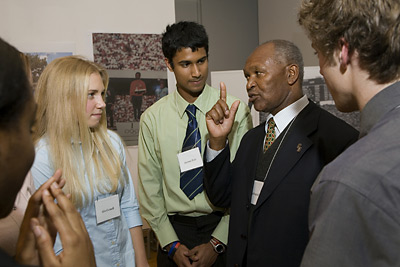 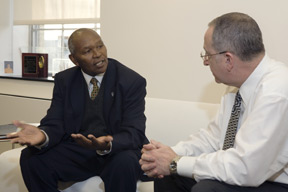 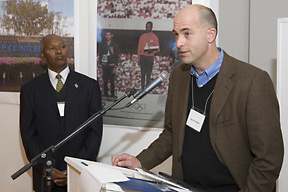 Robert Barker/University Photography
David Driskell, a lecturer in the Department of City and Regional Planning, talks about his urban design project in Kenya during a reception for Keino in Hartell Gallery.

Olympic gold medalist Kipchoge "Kip" Keino has gone the distance, both on the track and for his fellow man -- and his inspiration and example were strongly felt during a visit to Cornell Dec. 14.

The College of Architecture, Art and Planning (AAP) welcomed the famed distance runner and humanitarian with a reception in Sibley Hall's Hartell Gallery that also launched two new initiatives in Keino's native Kenya -- the Growing Up in Nairobi program and a collaborative planning and architecture studio.

The Growing Up in Nairobi program begins Jan. 3 with a group of nine Cornell students traveling to Nairobi to help young people affect change in their urban environment. Nearly half of the population of Nairobi is under age 25, said David Driskell, the UNESCO chair of the Growing Up in Cities program in Cornell's Department of City and Regional Planning. The program also collaborates with the United Nations agency UN-HABITAT.

Working in the Kibera and Mukuru areas of Nairobi, Cornell students and local young people will identify priorities for change and work with local partners to make it happen. They will get strategic assistance from students in the joint architecture and planning studio initiative, which starts in late January under the direction of Driskell and Jeremy Foster, a visiting professor of architecture. Areas of study will include building and water management technologies and globalization issues; local groups will have an opportunity to work with Keino as well.

Keino, 68, has engaged in a number of entrepreneurial and humanitarian efforts in Kenya's Rift Valley, including funding an AIDS program and running an orphanage he founded after he and his wife took in two children in 1983.

His High Performance Training Center in Eldoret provides runners from about 30 nations with high-altitude training and feeds them -- and many people in the surrounding community -- from Keino's self-sustaining 500-acre organic farm. The training center is sanctioned by the International Olympic Committee (IOC) and has produced 30 Olympic athletes since 2000. Its current goal is to send 40 more to the 2008 Olympic Games in Beijing, Keino's son Ian said.

Keino also operates a tea plantation and a sporting goods store, is a member of the IOC and president of Kenya's Olympic Committee and continues to race, having run full marathons well into his 60s.

"[He] is more than just an amazing runner; he's a hero and a role model who all children should know," said Christian Thompson, one of five Ithaca-area high school runners delivering remarks about Keino's achievements and a wish list of possible collaborations with Cornell, some of which Keino and AAP Dean Mohsen Mostafavi had discussed with President David Skorton in a meeting before the reception.

"You have tremendous facilities in this country; you have manpower and technology," Keino said at the reception. "I and my family, we realize we have a lot to share with others. But we cannot do it without unity, peace and love. We pray for you to achieve more and help this world. The world needs you, and we need to learn from you."

Keino's visit was facilitated by Kevin Thompson, M.S. '83, who first met Keino three years ago in Kenya, and his wife, Michelle Thompson, M.R.P. '84, Ph.D. '01, a visiting lecturer in city and regional planning.

"He's always been my hero. I told him I'd come back to help promote the camp," said Kevin Thompson, a Cornell assistant track coach who will accompany the first group of students to Nairobi in early January.