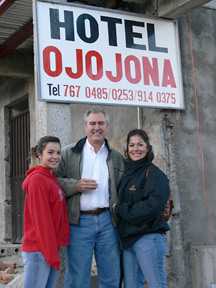 Provided
Kenneth Brown '74 with his daughter, Lauren Torres, 13, left, and his wife, Elizabeth Sanjuan, in Ojojona, Honduras. The family traveled to the rural Honduran village to witness the ribbon-cutting of a water plant that Cornell students helped design.

It was three years ago when Kenneth Brown '74 first heard of Cornell engineering students' efforts to bring clean water to rural Latin American villages. This, he thought, was a cause worth supporting.

On Jan. 13, Brown and his family attended the dedication of a new water plant in Ojojona, Honduras, built with his gift of nearly $30,000.

"This is so important, and so close to the realities of the world today," Brown said. "They are doing good engineering work, but in the context of what really matters."

Brown, who holds a degree in mechanical engineering from Cornell, provided most of the funding for the water plant in Ojojona. The plant was built through a program called AguaClara, led by Monroe Weber-Shirk, a senior lecturer in civil and environmental engineering.

Engineering students in Weber-Shirk's course of the same name, together with the Honduran organization Agua Para el Pueblo, designed the water plant for the rural village of Ojojona. Weber-Shirk, the students, and Brown and his family traveled to Honduras during the weekend of Jan. 13 to attend a ribbon-cutting for the new plant.

"Ken's contributions have created new opportunities to engage in the significant engineering challenge of providing clean drinking water to the billion who lack it," Weber-Shirk said. "Working to meet this millennium development goal inspires many students who want to use engineering to do something that really matters."

Involvement with AguaClara affects students even after they have left campus. Cornell students previously designed a water plant for the Honduran village of La 34, a project that was completed in 2005. Perla Lastra, one of the students who worked on that project, recently wrote, "This was by far the most rewarding and fun project that I ever participated in, and I'd love to contribute again." 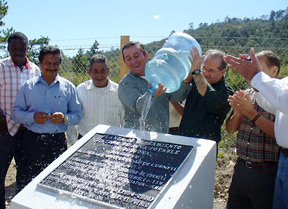 Provided
Hondurans celebrate the opening of a water plant in their village of Ojojona. Cornell students led by civil and environmental engineering senior lecturer Monroe Weber-Shirk helped design the plant.

In addition to his support of AguaClara water treatment plants, Brown and his wife, Elizabeth Sanjuan, have committed $25,000 a year for about five engineering internships in Latin America for Cornell students, through the nonprofit organization Engineers for a Sustainable World, which was founded at Cornell.

"Most of our partners don't have the financing to support bringing volunteers or staff to work on the projects," Clewlow explained. "Usually the students fund-raise or pay out of pocket for their volunteer experiences. With the kind of support [Ken] has given, he relieves some of the burden the students have been bearing."

Brown's enthusiasm for AguaClara, and for sustainable engineering in general, stems from a former career in engineering.

During the 1990s, Brown worked as a regional manager for General Electric, living in Mexico, Central America, Singapore and Southeast Asia. During those years, the experiences that had the most impact on Brown were those of community-oriented activities: building orphanages, helping in schools and working at hospitals.

"Nothing will compare to the opportunity to see what impact you'd had in the eyes of a child," Brown said.

Brown has since become a founding partner in a private equity firm called One Equity Partners (a part of JPMorgan Chase), and had been searching for a humanitarian cause in which he really believed.

When he met Weber-Shirk at an Engineering College Council dinner and first learned of AguaClara, he knew he had found it.

"I resolved then and there to figure out a way to support this work, and to get Monroe to the place where we could actually see plants being built," Brown said.