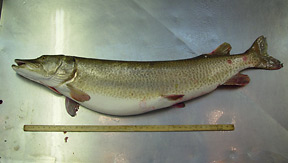 Provided
Muskellunge, New York's No. 2 sport fish, have been diagnosed with VHSV. A new study will specifically focus on muskellunge fisheries in the St. Lawrence River, Chautauqua Lake and the Niagara River to determine the pathogen's prevalence in these populations and at different times of year.

Cornell researchers are fine-tuning a new technique they developed to rapidly detect a deadly fish virus that has increasingly appeared in the Great Lakes and neighboring waterways. Current tests take a month, while the new technique, which measures viral genetic material, takes only 24 hours to identify the virus.

The viral hemorrhagic septicemia virus (VHSV) has been isolated in a wide variety of dead fish from the St. Lawrence River, the Niagara River, Lake St. Claire, Lake Erie and Lake Ontario. Most recently the virus was detected in Lake Huron only 22 miles from Lake Michigan. VHSV has caused large fish kills and has been detected in muskellunge, New York's number two sport fish.

Cornell's College of Veterinary Medicine is set to receive a two-year, $181,000 grant from New York Sea Grant to develop the genetics-based test to spot the virus in both tissue and water samples. The grant also will be used to study optimal ways of handling specimens to be sent for testing.

"The virus is very unstable," said Paul Bowser, Cornell professor of aquatic animal medicine and one of the grant's lead investigators. "If fish are collected by a field biologist in a remote location and they are not properly refrigerated, the virus will decompose by the time it reaches the lab."

The researchers also will investigate the virus' stability in fresh and turbid water to see how these conditions impact detection.

The grant will specifically focus on muskellunge fisheries in the St. Lawrence River, Chautauqua Lake and the Niagara River to determine the pathogen's prevalence in these populations and at different times of year.

Cornell received more than 1,300 fish samples between May and December last year, and researchers have tested all of them using the new technique. They are about two-thirds of the way through testing the same samples using the older technique, which relies on cell cultures, to compare results.

"Once this technique is accepted by national and international organizations, it will be adopted as the standard test," said Geoffrey Groocock, a postdoctoral associate at Cornell's Aquatic Animal Health Program. "Then, people can send samples to us or other programs to quickly and accurately diagnose the emergence of this disease."

There remains no way to vaccinate fish against this disease, and any measures to control its spread require people to "apply procedures that existed prior to the discovery of vaccines, such as monitoring outbreaks and trying to isolate fish so they don't spread the disease," said Jim Casey, Cornell associate professor of veterinary microbiology and immunology and one of the grant's lead researchers.

The U.S. Department of Agriculture has issued an order to prevent movement of 37 fish species throughout the Great Lakes, with the exception of fish that have already been tested.

All cases of VHSV must be reported to the World Organization of Animal Health. The international agency usually imposes restrictions on any host country with VHSV to prevent fish from being moved to other areas and countries.

The New York State Sea Grant program is funded by the National Oceanic and Atmospheric Administration, the State University of New York and Cornell.