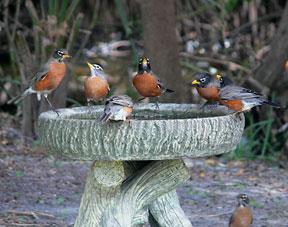 Lorraine Margeson, 2007 GBBC participant in Florida
More than 2 million robins, the most numerous species counted in this year's Great Backyard Bird Count, were reported from 60 states and Canadian provinces.

In just four days in February, participants in the Great Backyard Bird Count (GBBC) tallied more than 11 million birds across the United States and Canada. Together, they recorded 616 species and submitted more than 80,000 checklists -- 33 percent more than the previous high of 61,000 checklists in 2000.

The GBBC, a joint project of the Cornell Lab of Ornithology and National Audubon Society, engages people of all ages and levels of experience in learning about birds and reporting their sightings for conservation.

"There has never been a more detailed snapshot of continental bird distribution in history," said John Fitzpatrick, director of the lab. "It used to take scientists years to gather large-scale information about bird population and distribution -- and the GBBC does it in just four days each year, thanks to a continentwide community of birders reporting their counts online."

Along with collecting valuable data, the count also gathers new and vital support for the environment. "This record-breaking turnout is proof of a powerful formula -- birds plus fun equals a lifelong connection to nature," said Audubon President John Flicker. "It turns kids, parents and grandparents into more than citizen scientists; it helps make them citizen stewards for the health of our planet."

American robins topped the list as the most numerous species counted, with more than 2 million robins reported in 60 states and provinces. Participant Lorraine Margeson estimated a flock of 750,000 robins roosting in a mangrove forest in St. Petersburg, Fla. "In the morning, the robins just pour out of there," she observed. "It's spectacular with the sunrise on their red bellies. When you see it, you think this is what makes life worth living."

Full results of the count are available online at http://www.birdcount.org/. Visitors can see what birds were reported in their own town or across the continent and explore dynamic maps showing how bird distribution and abundance have changed during 10 years of the GBBC.