Courtesy of the Ithaca Journal
Then-Cornell President James A. Perkins, left, speaks in Sage Chapel at a memorial service on April 7, 1967, for the victims of the fire.

In the early morning hours of April 5, 1967, Diego Benardete was pulling an all-nighter, writing a paper in his dorm room at the off-campus Cornell Heights Residential Club, when he heard shouting from the hallway.

"I opened the door, and there was smoke billowing down the corridors," recalls Benardete, then a first-year student in Cornell's experimental, accelerated six-year Ph.D. program. He tried unsuccessfully to ring a hallway alarm bell before he began pounding on doors yelling fire. He climbed out his first-floor window and, with a few others, borrowed a ladder from a fraternity nearby to help some of the 62 survivors climb out of their second-floor windows. Others tied sheets together to climb down from the second floor. 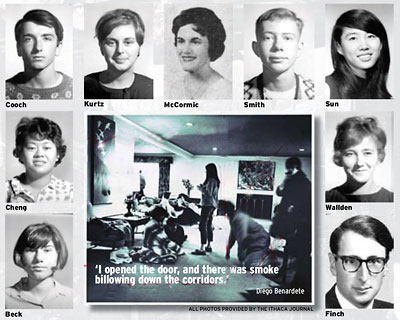 Eight students and a 37-year-old professor died of asphyxiation that night. How the fire started remains unsolved. Many people suspected arson, though no one was ever charged.

Cornell had purchased the two-story cement and red-brick 1950s motel on Country Club Road, just off Triphammer Road, in 1963 and began using it in 1966 as a residence hall for the six-year Ph.D. program and other students. Today it is Ecology House.

Reports of that night noted toxic smoke from vinyl and foam rubber upholstery near the basement lounge where the fire started. It then spread to wood paneling in the basement corridor and to bedrooms and a stairway adjoining the lounge. Firefighters reported becoming dizzy and weak from fumes.

"The new materials used in furniture were found to put out so many toxic gases," says Bob Romanowski, chairman of the Board of Fire Commissioners for the city and town of Ithaca, and a volunteer fireman who helped fight the fire.

Cornell associate professor of English John Finch, a faculty adviser for the Ph.D. program and a former British army officer, died from smoke inhalation after running back into the building to help others. 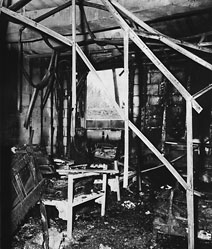 Courtesy of Ithaca Journal
This basement room in the Cornell Heights Residential Club was extensively damaged by the April 1967 fire.

"It was a very deep and difficult thing," says Benardete, now an associate professor of mathematics at the University of Hartford, Conn. "It was a real kick in the gut, a horrifying and sobering event to all of us who were there."

Two days later, on April 7, the bells of Sage Memorial Chapel slowly chimed as more than 1,200 people paid their respects in a 35-minute memorial service. Many hundreds more listened to the ceremony over speakers in the student union. Benardete recalls that Stephen Parrish, director of the Ph.D. program, gave a moving reading from Milton's poem "Lycidas."

"I can still hear: 'For Lycidas is dead, dead ere his prime ...,'" Benardete remembers.

At the time of the fire, the building had no fire escapes on the second floor, no fire alarm and no sprinkler system, though fire extinguishers had been placed throughout. Ironically, water mains had just been added to the building, and sprinkler installation had been scheduled for that morning, according to The New York Times, which covered the tragedy extensively. 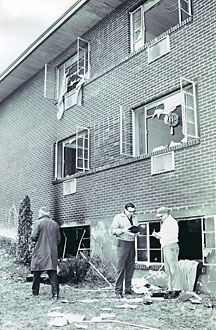 Courtesy of the Ithaca Journal
In the aftermath of the Cornell Heights fire, evidence of arson was found there and at two other graduate residences; officials blamed the deaths on substandard escape facilities and safety measures. Cornell Heights reopened the following September with a sprinkler system and exterior enclosed stairwells, and Cornell modified buildings across campus for safety.

"Unfortunately, fire codes are the result of disastrous fires," says Joe DeMarco, emergency services specialist at Cornell's Department of Environmental Health and Safety. "There were no fire drills back then. Fires like that one are the reason why we put so much effort into fire protection."

Soon after the 1967 fire, a portion of Cornell's safety division was designated as "Fire Service," and began recharging fire extinguishers and responding to daytime emergencies. The division then became Fire Safety, which started 24-hour coverage and campus building fire inspections, and later was named "Life Safety." In 1994, the Department of Environmental Health and Safety was established.

After commissioning private and internal fire risk assessments in the late 1990s, Cornell began retrofitting its fire sprinklers in the summer of 2000. "Currently, all undergraduate housing, university-owned fraternity and sororities and 95 percent of graduate housing have sprinklers," says DeMarco.

In the fall of 2004, a freshly installed sprinkler system put out a dorm room fire in Balch Hall. And more recently, on May 21, 2006, the sprinkler system in a North Campus residence hall (Low Rise No. 8) extinguished a kitchen fire.