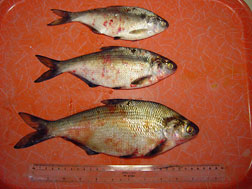 Provided
VSHV-positive gizzard shad collected during a fish mortality investigation by the New York State Department of Environmental Conservation in 2007 from Lake Erie near Dunkirk, N.Y.

A lethal fish virus in the Great Lakes and neighboring waterways is approaching epidemic proportions, according to Paul Bowser, Cornell professor of aquatic animal medicine in the College of Veterinary Medicine. The viral hemorrhagic septicemia virus (VHSV), which causes anemia and hemorrhaging in fish, has now been identified in 19 species and poses a potential threat to New York's $1.2 billion sport-fishing industry.

"It's pretty obvious this is an epidemic even if it isn't official," said Bowser. "There are just so many species affected and so many mortalities."

Three new fish kills have occurred in 2007 in New York waters since the virus was identified in the Great Lakes Basin in 2005. In the St. Lawrence River, hundreds of thousands of round gobies have succumbed to the disease; gizzard shad die-offs from VHSV in Lake Ontario west of Rochester and in Dunkirk Harbor on Lake Erie also have been reported. Adding to concerns about the spread of the virus, walleye in Conesus Lake have tested positive for VHSV. Conesus is the westernmost Finger Lake and is the only New York lake where VHSV has been found in a body of water other than the contiguous waters of the Great Lakes.

Also this month the Wisconsin Department of Natural Resources made a presumptive identification of the virus for the first time in the Lake Winnebago chain of inland lakes about 25 miles south of Green Bay on Lake Michigan; confirmation is pending. And millions of dead freshwater drum formed windrows of carcasses along the beaches of Lake Erie in 2006, all victims of VHSV.

Bowser suspects that the virus is still relatively new to the region and may have originated from an infected marine fish off the Atlantic Coast. Other possible sources of the virus include the movement of infected fish by airborne or terrestrial predators, anglers using infected bait minnows, contaminated fishing equipment or live water wells in boats, boating activities and ballast water.

"Basically, we don't know how it got here, but it's here and it's spreading," said Bowser. "It would be wonderful if we did know. However, I don't think we ever will."

The Great Lakes VHSV is not related to the European or Japanese genotypes and poses no health threat to humans, said Bowser. However, as a general rule, people should avoid eating any fish (or game) that appears abnormal or behaves abnormally. Not all infected fish, however, exhibit symptoms. Some may be carriers, and visible signs of the disease may vary from species to species.

Containing the spread of the virus in New York will require restrictions on the movement of live fish, testing fish and surveillance. For instance, New York state regulations require that bait fish be used in the same body of water from which they were collected unless they have been tested. In Wisconsin, new emergency rules prohibit anglers and boaters from moving live fish and require them to drain their boats and live wells before leaving Wisconsin's Great Lakes waters, the Mississippi River and those tributaries up to the first impassable dams, according to the Associated Press.

The spread of the virus could have a devastating impact on aquaculture and particularly the channel catfish trade, which constitutes about 80 percent of aquaculture business in the United States, said Bowser. Catfish is a very popular food fish in the Deep South.

"We have detected VHSV in channel catfish in our surveillance efforts," said Bowser. "The ability of the virus to go beyond a carrier state and cause disease in this important aquaculture species is a major research question we plan to investigate this year."

Cornell researchers have been assisting the New York state VHSV surveillance in collaboration with the state Department of Environmental Conservation, Cornell's Biological Field Station, Oneida Lake and the SUNY College of Environmental Sciences and Forestry--Syracuse Thousand Island Biological Station on the St. Lawrence River. Researchers also are working with support from the United States Department of Agriculture's Animal and Plant Health Inspection Service.

Earlier this year Cornell's College of Veterinary Medicine received a two-year, $181,000 grant from the New York Sea Grant Program to advance a rapid technique, developed by Cornell virologist James Casey, for detecting the deadly virus. Current tests take a month, while the Cornell test yields results within 24 hours. Researchers hope to have the new technique validated by the end of 2007 and all fieldwork completed by the end of 2008.