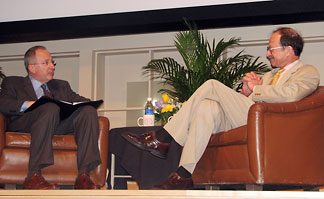 Krishna Ramanujan
Cornell President David Skorton, left, leads a discussion with Nobelist Harold Varmus, who spoke on campus April 30. The lecture and discussion will be broadcast May 7 at 7 p.m. on WEOS-FM as a special presentation of "Higher Ed in the Round," Skorton's radio show. It also will be available on CornellCast.

As a nation we simply don't care enough about science education. U.S. teachers are "underpaid shamelessly." Religion is undermining the teaching of evolution in many parts of the country. So said Harold Varmus, president and CEO of Memorial Sloan-Kettering Cancer Institute in New York City, speaking on campus April 30.

However, the former director of the National Institutes of Health and co-recipient of the 1989 Nobel Prize for physiology or medicine, noted that although science would appear to be under attack on several fronts, there is hope. His "anxieties are tinged with optimism," he said, by the considerable federal and private financing of science, the quality of science in this country and the public's confidence in science.

Delivering the annual Atkinson Forum in American Studies in Cornell's Statler Auditorium, Varmus said that proponents of creationism are using intelligent design to try to discredit Darwinism "with arguments that few scientists would accept," claiming that because there are gaps in our understanding of evolution, the most rational explanation is that life is the product of a supernatural force. "This, of course, is religion, not science," he said.

More government support for the sciences is required, he said. With the budgets of federal science agencies flattening in recent years, there has been less money for grants, especially for younger researchers, he said. This demoralizing atmosphere has caused U.S. undergraduates to steer away from hard science and has prompted fewer foreign students to study in the United States.

Varmus added that the Bush administration has introduced "perversions of advising and policy-making" by questioning the political leanings of potential advisers, appointing people with "skeptical training" to important positions and even altering scientific documents for political purposes. However, the problems in America are not created by a single entity, he said, but reflect a fissure in society that includes the blurring of boundaries between religion and state, and "the failure to recognize science as a foundation of our social and economic well-being and our ambivalent attitudes toward the rest of the world."

He said that we need to avoid isolationism as a reaction to global politics including the events of Sept.11, 2001, and improve our standing in the world by using science toward global goodwill. Promising examples, he cited, included the Gates Foundation's efforts to fund research on global health, nongovernmental agencies creating centers of science excellence in African nations and making peer-reviewed research accessible free worldwide.

The Atkinson Forum in American Studies is sponsored by David R. and Patricia D. Atkinson.