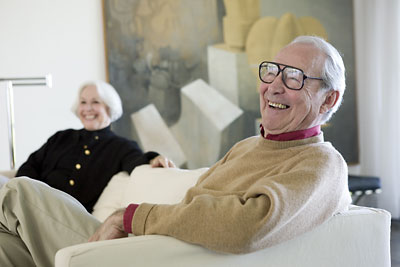 Though not one to seek the limelight, retired sculpture professor Jack Squier, MFA '52, will have to endure a bit of it during Cornell's Reunion Weekend.

Squier, who turned 80 in February, and wife Jane will be guests of honor at the premier of "Simply Squier," a 45-minute documentary about Squier's life, work and nearly 50-year relationship with Cornell.

Open to all alumni, friends and guests, the screening, sponsored by the Department of Art, will take place June 9 at 11:30 a.m. in the Statler Hotel amphitheater.

The documentary is the latest by alumni videographers Phil Handler '62, B.Arch. '64, M.Arch.'65, and his wife, Maddy Handler '65, who for the past eight years have captured the lives and legacies of alumni from the College of Architecture, Art and Planning (AAP) for showing during Reunion Weekend.

"Simply Squier" is their longest and most ambitious video effort to date, featuring footage from Squier's last semester of teaching at Cornell (fall 2004) and nearly 20 interviews with colleagues, friends and former students. The Handlers also took care to highlight the relationship between Jack and his wife of 57 years, Jane -- a love story that Maddy Handler described as nothing short of "amazing."

"They are a remarkable couple, and they've made a big difference to the face of Cornell as it exists today," Phil Handler said. "That makes it important to tell their story."

The film celebrates Squier's long and fruitful career, which spanned almost five decades of teaching sculpture. His Cornell legacy goes back to 1952, when he received Cornell's second-ever MFA in sculpture.

For decades, Squier maintained studio and teaching space in The Foundry, the oldest structure on campus, for which he helped gain historic landmark designation. He was one of the faculty members who lobbied against the dismantling of the AAP college about five years ago.

Squier was also instrumental in starting the Cornell in Rome program, which recently celebrated its 20th year. And among his best-known legacies is the concrete sculpture garden at the Cornell Plantations, which a group of his students created during the early 1960s.

Besides attending the film premiere, Squier will be giving remarks the afternoon of June 8 at the reinstallation ceremony for Jacques Lipchitz' bronze sculpture between Olin and Uris libraries.

Also to be featured during Reunion will be a guided tour of artwork by Popkin, which will include a viewing of the Handlers' earlier video on the artist.