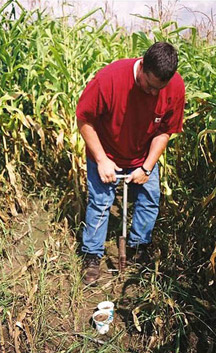 Ongoing field trials since 2002 by a team that includes 16 farmers, Cornell researchers and Cornell Cooperative Extension field crops educators in 10 counties are showing the value of on-farm research. Their results are successfully quantifying and predicting the nitrogen needs for growing corn, saving farmers money and reducing environmental impact.

"With this program, we focus on determining under what situations extra nitrogen would be good to add and when a farmer can save money by reducing fertilizer applications without impacting yield and quality," says Quirine Ketterings, associate professor of crop and soil sciences, who co-leads the research team. "This is the best way to minimize the potential negative environmental and economic impacts of excess nitrogen fertilizer use."

None of the 16 first-year corn trials evaluated in 2005-06 responded to additional nitrogen after the starter fertilizer, said Cornell graduate student Joseph Lawrence. This indicates that the forage grass and/or legume gave enough nitrogen back to the soil to feed the following year's corn crop, he said. Forage quality was not negatively impacted either.

For example, after farmer Mike Kiechle of Garden of Eden Farm in Philadelphia, N.Y., cut the excess nitrogen in his applications in the 2005 research trial that evaluated all treatments at his farm. With excess nitrogen, the corn grew taller but the ears were smaller and produced less grain.

"The corn that received less nitrogen was shorter, sturdier and produced more corn in the silage," Kiechle said. "I had been happy to harvest 18 tons of corn silage on my clay soils, so when we harvested 20 tons in 2006, I was excited." This year, Kiechle is applying half the nitrogen he used last year. "This on-farm research trial showed I was just wasting money to apply more. I cut back, and that has saved me about $10-$12 per acre."

And when farmer Dan Mulvaney used only 30 lbs of starter nitrogen on second-year corn at his farm in Conesus, N.Y., his corn silage yields increased 4 to 5 tons per acre, and his shelled corn increased from 100 to 140 bushels per acre.

In Freeville, N.Y., Beck Farm crop manager Jerry Coller manages 2,000 acres of crops and does not have enough manure to meet the nitrogen needs of those crops. He says the precision nitrogen project showed him that his grass crops provide more nitrogen than he thought, so less manure is required to fertilize those lands to grow corn. Coller has reconfigured applications to better distribute the farm's manure resources to other fields.

In New York state, some 460,000 acres produced 8.28 million tons of silage in 2006. Nitrogen fertilizer is growing increasingly expensive (about 40 cents per pound last year), so any reduction in nitrogen use improves farmers' bottom line and prevents nutrient losses into the environment.

This project, in its final year, is funded with grants from the Northern New York Agricultural Development Program and New York Farm Viability Institute and the Cornell Agricultural Research Station. The project team will also provide conclusions about use of soil nitrogen tests to determine when corn grown in New York needs nitrogen.

Eleanor Jacobs and Kara Dunn are both freelance writers.