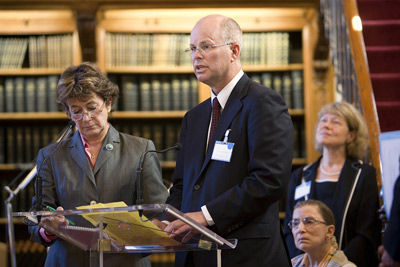 Jason Koski/University Photography
Stewart Schwab, the Allan R. Tessler Dean of Cornell Law School, speaks at the dedication ceremony of the Cornell Center for Documentation on American Law at the Cour de cassation in Paris, July 17, to an audience including Justice Ruth Bader Ginsburg '54, seated, and Professor Claire Germain, right. At left is the interpreter for the event.

PARIS -- French republican guards stood at attention in full regalia, from plumed silver helmets to swords at the hilt, while close to 100 invited guests ascended the marble staircase in the centuries-old building this morning (July 17).

The setting was the Cour de cassation, France's highest civil and criminal court, in the Palais de Justice on the Quai de l'Horloge in Paris. Among those in attendance were four U.S. Supreme Court justices and their European counterparts as well as a contingent of faculty, alumni and students from Cornell Law School and its summer institute in Paris.

The occasion was the dedication of a collection of 13,000 volumes of American case law, a gift from the Law School to the Cour de cassation. The only collection of its kind in France, it will be housed within the court as the Cornell Center for Documentation on American Law. The collection will be made available to French magistrates and to Cornell law faculty and students in the Paris summer institute.

About 2,000 of the books, most of them on U.S. Supreme Court rulings, have already arrived and were on view in the elegant two-story court library, a room with wrought iron balconies and carved-wood trim where the ceremony took place.

As a marker for posterity, an elegant plaque announcing Cornell Law School's role in establishing the center was prominently placed over the library doorway, high above the ceremony participants. 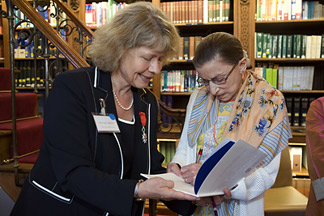 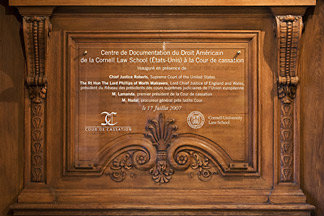 Vincent Lamanda, first president of the court, a position akin to chief justice of the United States, began the dedication with a thank you: "I pay tribute to Cornell Law School Dean Stewart Schwab and Law School librarian and professor Claire Germain for having made it possible to express in such a magnificent way the international cooperation that exists between France and the United States."

Added Jean-Louis Nadal, procureur général of the Cour de cassation, a title similar to chief prosecutor: "It is for us a source of pride to become the gateway of legal knowledge between our two continents and countries."

The Cornell American law collection came about when Sir Basil Markesinis, a former Law School faculty member, approached Schwab and told him that the court was interested in acquiring a library on American law. The dean then talked with Germain, who proposed that the library make a gift of the thousands of duplicate copies of case decisions, law journals and other materials, which were in less demand since the advent of the Internet. "In Europe, however, where electronic access is considerably limited, these paper-based materials are highly valued," she recalled advising the dean.

Germain, who was born in France and is both a French and an American citizen, was visibly touched when during the dedication Lamanda presented her with the Chevalier de la Légion d'Honneur medal, France's highest honor, originating under Napoleon, for her efforts in bridging the American and French legal cultures. Later she related that her grandfather had also received the medal for his services as a colonel in the French army during World Wars I and II.

"We are standing in an inspiring room witnessing the rebirth of jurisprudence where common principles dominate," Schwab told the gathering. "All of us are working to improve our world through a conception of a rule of law that protects individual liberties and the democratic process. I am proud that the Cornell center will further that goal for years to come as judges and scholars read these books and ponder their relevance to their own legal systems."

Germain noted, "In a world increasingly dominated by the Internet, it is important to remember that actual physical contact with books is essential to the communication of knowledge from generation to generation. They [books] are part of our international heritage and bear witness to our civilization." 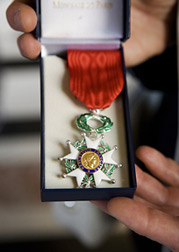 During the plaque's unveiling, U.S. Supreme Court Associate Justice Ruth Bader Ginsburg, Cornell Class of 1954, memorialized Cornell Law School professor and former teacher and colleague the late Rudolph Schlesinger. After escaping from Nazi Germany to the United States, he became one of the foremost experts on international comparative law and the first to teach it at a major law school, she related. "He taught me the value of learning from other legal systems and recognizing their common core as well as their differences. I know he would applaud the establishment of this center. This is a bright moment."

Also taking part in the dedication were John Roberts, chief justice of the United States, U.S. Supreme Court Associate Justices Stephen Breyer and Anthony Kennedy, and Lord Phillips of Worth Matravers, lord chief justice of England and Wales and president of the Network of Presidents of the Supreme Judicial Courts of the European Union. All were in Paris to participate in a judicial conference of the European Union network and the U.S. Supreme Court that followed the dedication.

"This is a fantastic effort in helping to spread to different cultures and systems what the American legal system is like," said Joel Simon '82, J.D. '85, a lawyer practicing in Paris who attended the dedication. "The cooperation between France and America is exemplified by this collection."

Freelancer Linda Myers is a former writer for the Cornell Chronicle.