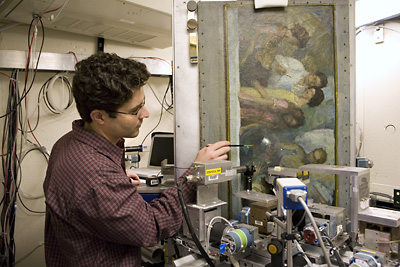 A team of Cornell scientists and art conservators had found their next work of art to analyze.The pentimento of a flying fist, just visible beneath layers of paint, triggered an investigation of N.C. Wyeth's "Family Portrait" at the Brandywine River Museum in Chadds Ford, Pa. A simple X-ray revealed that a 1919 magazine illustration lurked beneath the 1924 unfinished oil. An early recycler, Wyeth (Andrew's father) routinely painted new works over his illustrations.

The challenge: to identify and reconstruct the colors Wyeth used in the illustration, which had been printed in black and white. The team's technological advantage: the power of the Cornell High Energy Synchrotron Source (CHESS) and confocal X-ray fluorescence.

The museum X-ray was the equivalent of a dentist's office model: It shot straight through the canvas. The Cornell team, led by Arthur Woll, senior research associate at the National Science Foundation-supported CHESS, would employ X-rays many thousands of times more powerful to uncover Wyeth's color scheme, layer by layer. 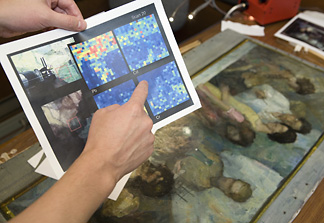 Jason Koski/University Photography
A printout shows the results of a preliminary scan; each quadrant indicates the presence of an element used in paint pigment. 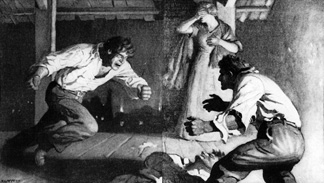 Provided
The original color version of this 1919 black-and-white magazine illustration lurks beneath the 1924 unfinished oil painting. 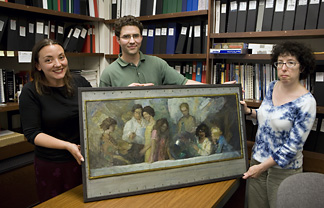 "We're one of three groups in the world doing this with a synchrotron, one of two in the United States who are doing it at all," says Woll. "I don't think they're as far along as we are looking at real objects of art-historical interest. CHESS will produce data that will enable us to determine what the pigment composition is and, from that, what the different colors are. Our goal is to reproduce the painting the way it looked when it was first made."

"Family Portrait" arrived on campus for a week of X-rays July 7, accompanied by Jennifer Mass, senior scientist at the Winterthur Museum and Country Estate and a University of Delaware faculty member.

Says CHESS director Sol Gruner, "The key to getting this all to work is to combine the talents of the physicists at CHESS with a powerful group of collaborators, namely, Dr. Mass, Noelle Ocon, associate conservator of paintings at the North Carolina Museum of Art, Christina Bisulca, a graduate of the University of Delaware's program in conservation, and Matt Cushman, a student in the same program. Without these human connections, nothing would happen."

As X-rays from the synchrotron penetrate the painting, some are absorbed and re-emitted by atoms comprising the different pigments. The wavelength and amount of re-radiated X-rays reveal the identity and amount of pigments in particular spots.

"Our technique allows us to isolate the X-rays from individual layers, which is difficult or impossible with more conventional methods," says Gruner. "This capability turned out to be especially important for 'Family Portrait' since, as the team discovered early in the week, zinc is the primary component of both layers of the painting."

"N.C. Wyeth wanted to bury his illustrations, so information we can get about how he worked as an illustrator will be of great art-historical significance," Mass says. "The structure answers a lot of questions: What methods did he use? How did he work?"

The Wyeth analysis is Cornell's second art project. The process can be painstakingly slow: Scanning a portion the size of a quarter took nine hours. "We could speed up things by a factor of 10 or 100 with enough resources, such as a new kind of X-ray detector that can count X-rays much faster than current technology," Woll says.

Woll also collaborates with other Cornell physicists as well as with dendrochronologists, who do related work on tree-ring samples, such as oak panels used by most 17th century Dutch and Flemish masters.