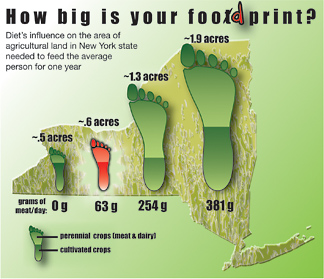 Illustration by Steve Rokitka/University Communications
Even though a moderate-fat plant-based diet with a little meat and dairy (red footprint) uses more land than the all-vegetarian diet (far left footprint), it feeds more people (is more efficient) because it uses more pasture land, which is widely available.

A low-fat vegetarian diet is very efficient in terms of how much land is needed to support it. But adding some dairy products and a limited amount of meat may actually increase this efficiency, Cornell researchers suggest.

This deduction stems from the findings of their new study, which concludes that if everyone in New York state followed a low-fat vegetarian diet, the state could directly support almost 50 percent more people, or about 32 percent of its population, agriculturally. With today's high-meat, high-dairy diet, the state is able to support directly only 22 percent of its population, say the researchers.

The study, published in the journal Renewable Agriculture and Food Systems, is the first to examine the land requirements of complete diets. The researchers compared 42 diets with the same number of calories and a core of grains, fruits, vegetables and dairy products (using only foods that can be produced in New York state), but with varying amounts of meat (from none to 13.4 ounces daily) and fat (from 20 to 45 percent of calories) to determine each diet's "agricultural land footprint."

They found a fivefold difference between the two extremes.

"A person following a low-fat vegetarian diet, for example, will need less than half (0.44) an acre per person per year to produce their food," said Christian Peters, M.S. '02, Ph.D. '07, a Cornell postdoctoral associate in crop and soil sciences and lead author of the research. "A high-fat diet with a lot of meat, on the other hand, needs 2.11 acres."

"Surprisingly, however, a vegetarian diet is not necessarily the most efficient in terms of land use," said Peters.

Chris Peters, the lead author of the study on New York's agricultural footprint, has been honored for related work on local "foodsheds," as well as his teaching and outreach, with the 2007 Gerald O. Mott Scholarship for Meritorious Graduate Students in Crop Science. The award will be presented Nov. 6 at the American Society of Agronomy, Crops Science Society of America and Soils Science Society of America's International annual meetings in New Orleans.

The reason is that fruits, vegetables and grains must be grown on high-quality cropland, he explained. Meat and dairy products from ruminant animals are supported by lower quality, but more widely available, land that can support pasture and hay. A large pool of such land is available in New York state because for sustainable use, most farmland requires a crop rotation with such perennial crops as pasture and hay.

Thus, although vegetarian diets in New York state may require less land per person, they use more high-valued land. "It appears that while meat increases land-use requirements, diets including modest amounts of meat can feed more people than some higher fat vegetarian diets," said Peters.

"The key to conserving land and other resources with our diets is to limit the amount of meat we eat and for farmers to rely more on grazing and forages to feed their livestock," said Jennifer Wilkins, senior extension associate in nutritional sciences who specializes in the connection between local food systems and health and co-authored the study with Gary Fick, Cornell professor of crop and soil sciences. "Consumers need to be aware that foods differ not only in their nutrient content but in the amount of resources required to produce, process, package and transport them."

According to the U.S. Department of Agriculture, the average American ate approximately 5.8 ounces of meat and eggs a day in 2005.

"In order to reach the efficiency in land use of moderate-fat, vegetarian diets, our study suggests that New Yorkers would need to limit their annual meat and egg intake to about 2 cooked ounces a day," Peters said.

The research was supported in part by the National Research Initiative of the USDA Cooperative State Research, Education and Extension Service.