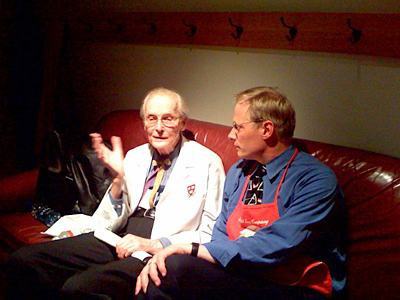 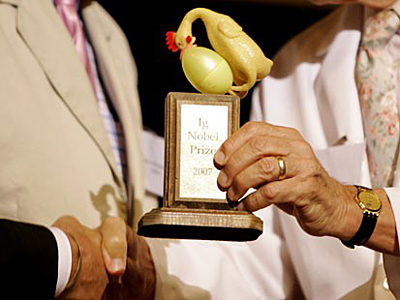 Provided
The Ig Nobel Award that Cornell's Brian Wansink won for his research on the bottomless soup bowl.

Last week, he was featured in Time magazine and USA Today. This week, he's been accorded yet another accolade: a 2007 Ig Nobel Award. All three recognize Cornell's indefatigable Brian Wansink for his quirky research on why we eat so much.

The scientific humor magazine Annals of Improbable Research has been giving out about 10 Ig (as in ignoble) Nobels (spoofing the venerable Nobel Prizes) annually since 1991 for "research that makes people laugh and then think."

Wansink's research on bottomless bowls of creamy tomato soup (hidden tubes imperceptibly keep refilling them) won in the nutrition category. He was on hand to receive his trophy, Oct. 4, at Harvard University from six authentic Nobel laureates.

The research, published as a featured article in the journal Obesity Research in 2005 showed that people eating from soup bowls that don't empty ate 73 percent more soup than those eating from normal bowls, said Wansink.

Yet, the slurpers at the self-filling bowls did not rate themselves any fuller than the normal-bowl slurpers, said Wansink, the John S. Dyson Professor of Marketing and of Applied Economics at Cornell, and author of "Mindless Eating: Why We Eat More Than We Think."

"This research shows that we eat with our eyes and not with our stomach," said Wansink. "The cues around us have a huge influence on not only what we eat, but also how much we eat and when we feel full."

Each year, between 6,000 and 8,000 people are nominated for Ig Nobel Prizes, according to Marc Abrahams, editor of the Annals of Improbable Research; about 10 to 15 percent are self-nominations, none of which has ever been accepted.