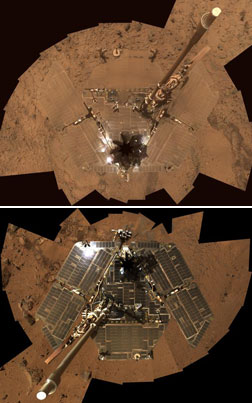 NASA/JPL-Caltech/Cornell
Top image: The deck of NASA's Mars Exploration Rover Spirit is so dusty that the rover almost blends into the background in this image assembled from frames taken by the panoramic camera (Pancam) during the period from Spirit's Sol (Martian day) 1,355 through Sol 1,358 (Oct. 26-29, 2007). The bottom image of Spirit -- taken on Sol 586 (Aug. 27, 2005) -- offers a striking comparison of the solar panels. 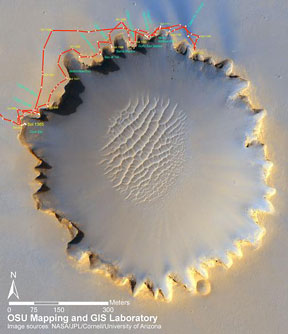 NASA/JPL-Caltech/University of Arizona/Cornell/Ohio State University
Victoria Crater, about 800 meters (one-half mile) in diameter, has been home ground for NASA's Mars Exploration Rover Opportunity for more than 14 of the rover's first 46 months on Mars. This view shows the rover's path overlaid on an image of the crater taken by the High Resolution Imaging Science Experiment on NASA's Mars Reconnaissance Orbiter.

Inch by power-conserving inch, drivers on Earth have moved the Mars rover Spirit to a spot where it has its best chance at surviving a third Martian winter -- and where it will celebrate its fourth anniversary (in Earth years) since bouncing down on Mars for a projected 90-day mission in January 2004.

Meanwhile, researchers are considering the implications of what Cornell's Steve Squyres, principal investigator for NASA's Mars Exploration Rover mission, calls "one of the most significant" mission discoveries to date: silica-rich deposits uncovered in May by Spirit's lame front wheel that provide new evidence for a once-habitable environment in Gusev Crater.

Squyres and colleagues reported the silica deposits at the annual meeting of the American Geophysical Union in early December in San Francisco.

On the other side of Mars, Spirit's still-healthy twin Opportunity is creeping slowly down the inside of Victoria Crater, where layers of exposed rock are confirming findings made at the much smaller Eagle and Endurance craters -- and where deeper layers could offer new insight into the planet's history.

Spirit, which has been driving backward since its right front wheel stopped turning in March 2006, was exploring near a plateau in the Gusev Crater known as Home Plate when scientists noticed that upturned soil in the wake of its dragging wheel appeared unusually bright.

Measurements by the rover's alpha particle X-ray spectrometer and mini-thermal emission spectrometer showed the soil to be about 90 percent amorphous silica -- a substance associated with life-supporting environments on Earth.

"This is one of the most powerful pieces of evidence for formerly habitable conditions that we have found," said Squyres, Cornell's Goldwin Smith Professor of Planetary Science, in a Dec. 11 interview with the BBC.

On Earth, silica deposits are found at hot springs, where hot water dissolves silica in rock below the surface, then rises and cools, causing the silica to precipitate out near the surface; and at fumaroles, where hot acidic water or vapors seep through rock, dissolving away other elements but leaving silica behind.

"Either place on Earth is teeming with microbial life," said Squyres. "So this is, either way, a representation of what in the past was a local habitable environment -- a little habitable niche on the surface of Mars."

The discovery was reminiscent of Spirit's journey to winter safety last year, when it uncovered (and briefly got mired in) patches of bright soil that contained high levels of sulfur -- another possible indicator of past hydrothermal activity.

Unlike last year, though, Spirit enters this Martian winter handicapped by dusty solar panels -- the result of giant dust storms in June and July. So the rover's power levels, which currently range between approximately 290 and 250 watt-hours (100 watt-hours is the amount of energy needed to light a 100-watt bulb for one hour; full power for the rovers is 800-900 watt-hours) -- could drop to dangerous levels in the dwindling winter sunlight.

Spirit's perch is currently at a 15-degree tilt on the north-facing slope of the Home Plate plateau, said Jim Bell, Cornell associate professor of astronomy and leader of the mission's Pancam color camera team. As the sun moves lower in the Martian sky, drivers will nudge the rover to a steeper angle.

"The fact that we've gotten to a good tilt, and we're going to get to a better tilt, is a good sign," said Bell. Still, he added, any work the rover does over the winter -- collecting Pancam images of its surroundings, for example -- will be strictly low-exertion.