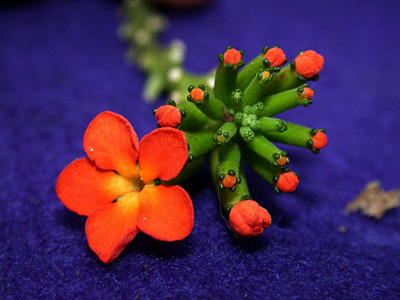 Provided
A myrsine blossom, one of the many tropical species of wildflower that has moved into the reforested plots that Carl Leopold and colleagues have been monitoring in Costa Rica in their attempt to regrow a rain forest. 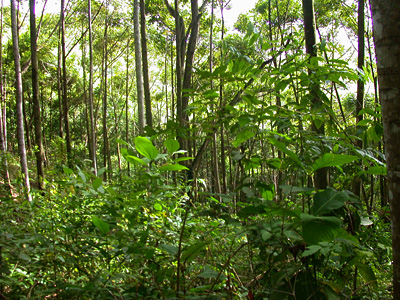 Provided
Half a century after most of Costa Rica's rain forests were cut down, researchers from the Boyce Thompson Institute for Plant Sciences (BTI) on the Cornell campus are attempting what many thought was impossible -- restoring a tropical rain forest ecosystem.

Half a century after most of Costa Rica's rain forests were cut down, researchers from the Boyce Thompson Institute for Plant Sciences (BTI) on the Cornell campus are attempting what many thought was impossible -- restoring a tropical rain forest ecosystem.

When the researchers planted worn-out cattle pastures in Costa Rica with a sampling of local trees in the early 1990s, native species of plants began to move in and flourish, raising the hope that destroyed rain forests could one day be replaced.

Ten years after the tree plantings, Cornell graduate student Jackeline Salazar counted the species of plants that took up residence in the shade of the new planted areas. She found remarkably high numbers of species -- more than 100 in each plot. And many of the new arrivals were also to be found in nearby remnants of the original forests.

"By restoring forests we hope not only to be improving the native forests, but we are helping to control erosion and helping the quality of life of the local people," said Carl Leopold, the William H. Crocker Scientist Emeritus at BTI. He pointed out that drinking water becomes more readily available when forests thrive because tree roots act as a sort of sponge, favoring rainwater seepage and preventing water running off hills and draining away.

Fully rescuing a rain forest may take hundreds of years, but Leopold, whose findings are published with Salazar in the March 2008 issue of Ecological Restoration, said the study's results are promising. "I'm surprised," he said. "We're getting impressive growth rates in the new forest trees."

The project started when Leopold partnered with colleagues at the Ithaca-based Tropical Forestry Initiative; in 1993 they began by planting mixtures of trees on worn-out pasture land. For 50 years the soil had been compacted under countless hooves, and its nutrients washed away. When it rained, Leopold said, the red soil appeared to bleed from the hillsides. 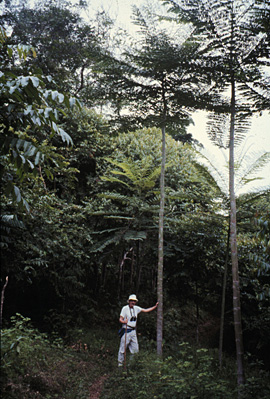 Carl Leopold posing with a tree in front of one of his plantings, which had been growing for more than three years in a Costa Rican rain forest.

The group chose local rain forest trees for planting, collecting seeds from native trees in the community. "You can't buy [these] seeds," Leopold said. "So we passed the word around among our farmer neighbors." When a farmer reported a tree producing seeds, Leopold and his wife would ride out on horses to collect the seeds before hungry monkeys beat them to it.

The group planted mixtures of local tree species, trimming away the pasture grasses until the trees could take hold. This was the opposite of what commercial companies have done for decades, planting entire fields with a single type of tree to harvest for wood or paper pulp.

The trees the group planted were fast-growing, sun-loving species. After just five years, those first trees formed a canopy of leaves that shaded out the grasses underneath.

"One of the really amazing things is that our fast-growing tree species are averaging 2 meters of growth per year," Leopold said. He believes that microscopic soil fungi called mycorrhizae can take much of the credit. They have apparently survived in the soil and form a symbiosis with tree roots. Research at Cornell and BTI, he said, has shown that without mycorrhizae, many plants can't grow well.

The promising results of the project mean that mixed-species plantings can help jump-start a complex rain forest. Local farmers who use the same approach will reduce erosion of their land, while creating a forest that can be harvested sustainably, a few trees at a time.

Beth Skwarecki is a freelance writer in Ithaca.