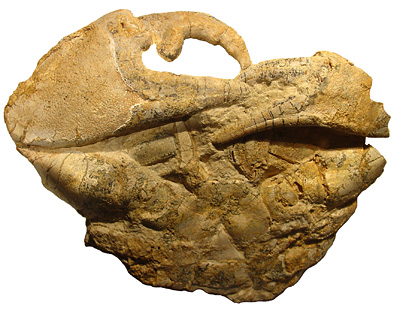 While waiting for colleagues at a small natural history museum in the state of Chiapas, Mexico last year, Cornell paleontologist Greg Dietl chanced upon a discovery that has helped rewrite the evolutionary history of crabs and the shelled mollusks upon which they preyed.

In a museum display case he recognized a 67- to 69-million-year-old fossil from the Late Cretaceous period of a big crab with an oversized right claw. Such crabs with claws of different sizes were not known to exist until the early Cenozoic era, about 20 million years later. Aside from being larger than most known Late Cretaceous crabs (about the size of today's Florida stone crabs) and having asymmetrical claws, this ancient crab also sported a curved tooth on the movable finger of the larger right claw. This was another specialized adaptation that paleontologists thought developed millions of years later for peeling snail shells open.

"I immediately had to point it out to my colleagues around me," said Dietl, an adjunct professor in Cornell's Department of Earth and Atmospheric Sciences and director of collections at the Cornell-affiliated Paleontological Research Institution in Ithaca. "I was really excited when I found it. The fossil re-opens the question of the role crabs played in the well-documented restructuring of marine communities that occurred during the Mesozoic era [251 million years ago to 65 million years ago]."

The discovery led to a study, published March 10 in the online version of the Royal Society's Biology Letters journal, coauthored by Francisco J. Vega, a geologist at the Universidad Nacional Autónoma de México.

The museum's staff showed Dietl and colleagues another fossil of the same species in a back room. Both specimens, found near the town of Ocozocoautla in southeastern Mexico, are the oldest fossils with these unique features on record and represent a new species, Megaxantho zogue .

The large right "crusher" claw generated a great deal of force to break shells, while the smaller left cutter claw moved faster and could manipulate prey into position. Also, the curved tooth increased the power of the claw.

Dietl hopes the discovery will spur other researchers to search for similar examples of these curved tooth structures from the Late Cretaceous period, just prior to the extinction of the dinosaurs.

Although Megaxantho crabs became extinct around 65 million years ago, these features evolved again in other crab species throughout the Cenozoic era, leading to present-day crabs, according to the study. The repeated evolution suggests that such power-enhancing adaptations may evolve during times and places where resources are abundant and accessible, Dietl said.

The study may be relevant to the current stresses of habitat loss, overfishing, climate change and other human-influenced activities that are reducing the productive capacity of the environment.

"We may be diminishing the capacity of organisms to adapt in novel ways," a consideration that conservationists may need to account for in future strategies for protecting natural areas, he said.