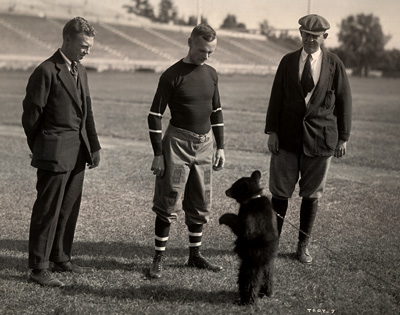 Most people know the Cornell bear as the costumed crowd-pleaser at football games and other sporting events, cheering on the Big Red. But once upon a time, the mascot wasn't a costumed cavorter, but a flesh-and-blood, honey-eating, mischievous bear cub who lived on campus, attended football games and won over crowds with his adorable antics.

The original bear, named Touchdown, first came to campus in 1915. Subsequent bears were brought here in 1916, 1919, and for the last time in 1939. The story behind these "real" Cornell bears, and the tradition they inspired, is chronicled in "Touchdown: The Story of the Cornell Bear," by John H. Foote '74. Proceeds from the book will go to the capital campaign.

"Touchdown" describes how the four bears came to Ithaca and the people who brought them here. It's not a new story, admits the author, but one that he wished to write definitively to clear up lore and factual fallacies surrounding the original Touchdown. He also has a special affection for the mascot, since his best friend during his undergraduate years played the Big Red bear at sporting events. 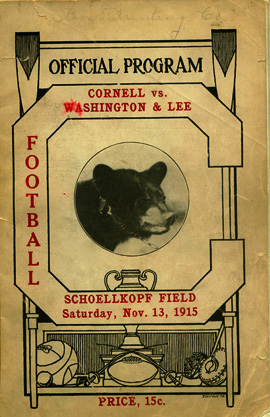 Provided
A program from a 1915 Cornell football game.

"The more I got into it, the more I found out these bears have an incredible history," said Foote, who serves as president of his class. "All four bears had a very different experience on the Hill, which ranged from road trips to kidnappings to being arrested."

By writing the history of Touchdown, Foote said he found that the book followed an undercurrent of unofficial Cornell history. The bear cubs were owned by the Cornell Athletic Association, which was affiliated with, but not officially part of, the university.

The last bear, Touchdown IV, was at Cornell in 1939, and this bear was "completely unsanctioned" -- brought to campus first as a prank by Cornell students who thought it would be funny to bring back the tradition that had gone on hiatus for 20 years, Foote said.