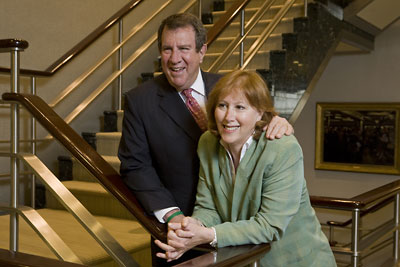 Lindsay France/University Photography
A gift of $35 million from Andrew and Ann Tisch will establish the Tisch University Professorships to honor current faculty and recruit the most talented young scholars.

Cornell trustee Andrew H. Tisch '71 and wife Ann are giving Cornell $35 million to establish the Tisch University Professorships, allowing the university to honor -- and retain -- current faculty members and recruit the most talented young scholars and researchers from around the world.

President David Skorton will announce the gift today, Sept. 26, at a reception at the Herbert F. Johnson Museum of Art.

The Tisch endowment, which can be used universitywide and allocated at the provost's discretion, is designed to give Cornell flexibility to pursue new initiatives, rebuild those academic departments depleted by multiple retirements, strengthen emerging interdisciplinary fields, and attract and retain the most sought-after mid-career professors.

Interim Provost David Harris said the Tisch University Professorships gift comes as a welcome relief at a time of intense competition among universities to retain and attract top faculty. "It is especially important in this highly competitive environment to strike quickly while recruiting the most prominent scholars and while retaining Cornell's most sought-after professors," said Harris. "Through the generosity of Andrew and Ann Tisch, the provost will now have greater flexibility to address our most urgent needs."

Along with its provision for competitive salaries, the professorships may include funding to cover start-up costs, graduate research support, travel and conference expenses, sabbatical leave and other needs on a case-by-case basis.

"Right now, we're hiring our reputation for the next two to three decades," said G. Peter Lepage, the Harold Tanner Dean of the College of Arts and Sciences. "We need all the flexibility we can have when competing with the top institutions in the country. At the College of Arts and Sciences, fully one-quarter of our faculty were hired in the last five years. I expect this pace to continue for several years."

Geoffrey W. Coates, professor of chemistry and chemical biology whose research has led to advances in the search for biodegradable and sustainable polymers, has been nominated to be the first Tisch University Professor.

"[Coates] is one of our very best people, one of the intellectual leaders on campus in the physical sciences," Lepage said. "The Coates Group brings critical contributions to sustainability research. In addition, Geoff founded one of Cornell's most successful spin-off technology companies."

Andrew Tisch is co-chairman of the board and chairman of the executive committee of Loews Corp., a company with interests in oil and gas, financial services, watches, real estate and hotels. (The family sold the Loews movie chain in 1985.) Ann Tisch, a former reporter for NBC, is the founder and president of The Young Women's Leadership Foundation and The Young Women's Leadership School.

The Tisch family has a long history of support for Cornell, funding scholarships and contributing consistently to the university's annual fund. In 2002, Andrew Tisch and brother James S. Tisch '75 established the Andrew H. and James S. Tisch Distinguished University Professorship, which is awarded to a distinguished faculty member approaching retirement -- allowing the faculty member to focus on teaching for up to three years while freeing the provost to hire another professor in the same field or elsewhere.

Cornell historian Walter LaFeber was the first to hold the Tisch Distinguished University Professorship, which is the university's highest distinction awarded to a faculty member. Evolutionary biologist and historian William Provine was awarded the post in 2006.

Faculty recruitment and retention is a key piece of Cornell's ongoing capital campaign. Of the campaign's total goal of $4 billion, the goal for faculty support is $1.885 billion, with $1.635 billion targeted for the Ithaca campus. To date, $678 million (51 percent) has been raised toward the Ithaca goal.