The name Smuttynose Island may recall the infamous 1873 ax murders or even Smuttynose Craft Beer, made in Portsmouth, N.H. But the island, one of the Isles of Shoals six miles off the Maine and New Hampshire coast, boasts a rich history of North Atlantic fisheries dating back to European settlement in the early 1600s. 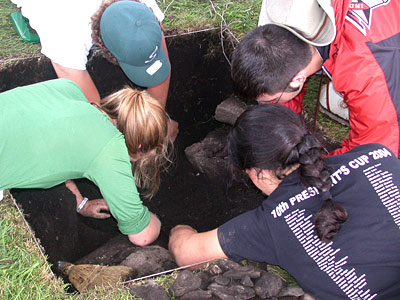 This summer, Smuttynose Island became the site of an archaeological dig during a one-week course through Shoals Marine Lab, a marine biology teaching and research facility housed on Smuttynose's sister island, Appledore, and run by Cornell and the University of New Hampshire. The course in island archaeology, offering field training in archaeological excavation, will be expanded next year to two weeks.

Along with pipes, thimbles, pottery, fishing gear and other artifacts that tell stories about the island's inhabitants, a biological record was created by unearthed fish bones that help answer ecological questions, such as whether overfishing may have caused the decline of cod populations in the 19th century. The findings support historical records to help document when these fisheries started to decline.

"The Isles of Shoals' importance to early America can hardly be overestimated," said Robin Hadlock Seeley, one of the class instructors and an assistant director for academic advising and senior research associate at Shoals Marine Lab. "Fishing was the base of the economy, and the global price of cod was set here." 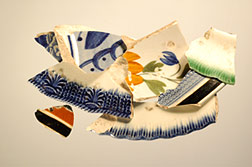 Bones showed that cod and other fish species became smaller from the 16th to the 19th century as the fishing industry grew. "Fish vertebrae at the bottom of a pit were much larger than those found at the top of the pit," said Seeley. "The fish they were processing in the 17th century appear to have been huge." The researchers plan to do isotope analyses of bones to learn what fish were eating and how climatic conditions may have affected them.

Seeley uncovered a red clay pipe from the 17th century, which indicates that traders from the Chesapeake area visited Smuttynose. Also, the type of finish and glazes on shards of pottery allowed Hamilton to precisely date items and site layers. A British 1779 George III penny signified a period around the time of the American Revolution when the Isles of Shoals were cleared, and populations never resumed their prior heyday, said Hamilton. Seeley and Hamilton said the vast amount of materials excavated will provide enough data for several projects, including a study documenting the timing of introduction of an invasive snail around 130 years ago, said Seeley, who is also a malacologist (snail expert).