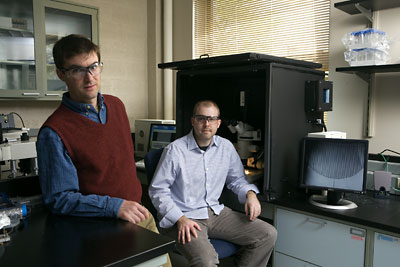 Robert Barker/University Photography
Abraham Stroock, left, and Tobias Wheeler, with a close-up of the synthetic tree on the computer monitor.

Stroock and graduate student Tobias Wheeler have created a "tree" that simulates the process of transpiration, the cohesive capillary action that allows trees to wick moisture upward to their highest branches.

The researchers' work, reported in the Sept. 11 issue of the journal Nature, bolsters the long-standing theory that transpiration in trees and plants is a purely physical process, requiring no biological energy. It also may lead to new passive heat transfer technologies for cars or buildings, better methods for remediating soil and more effective ways to draw water out of partially dry ground.

Of course, the synthetic tree doesn't look much like a tree at all. It consists of two circles side by side in the gel, patterned with evenly spaced microfluidic channels to mimic a tree's vascular system.

In nature, trees use water in tubular tissues, called xylem, like ropes that pull more water out of the ground, delivering it to leaves. They manipulate the water in the xylem under negative pressure -- what's called a metastable liquid state -- right on the verge of becoming a vapor. 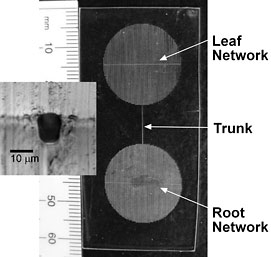 Abraham Stroock and Tobias Wheeler
A transparent sheet of pHEMA, 1 millimeter thick, is etched with 80 parallel channels of varying lengths arranged to form a circle and connected by a single channel. The inset shows an optical micrograph of the cross-section of one microchannel. 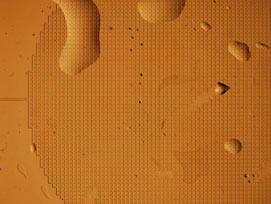 Tobias Wheeler
This optical micrograph of a synthetic tree shows a "trunk" channel entering from the left into a network of microchannels in the "leaf," or "root," network. The channels are approximately 100 micrometers wide, and total field of view is approximately 1.5 centimeters wide.

Xylem-like capillaries are relatively easy to create by microfabrication, but the researchers' choice of a material to act as membranes in the leaf and root to separate the liquid from the atmosphere and the soil was much trickier.

Stroock, assistant professor of chemical and biomolecular engineering, and Wheeler, a graduate student in his lab, used pHEMA hydrogel, or polyhydroxyethyl methacrylate, to form the plant membranes. The hydrogel is a solid embedded with water and has nanometer-scale pores. The material acts as a wick by holding liquid in the pores, through which capillary action creates tension in the water.

By building mimics of xylem capillaries within the gels, the scientists were able to create negative-pressures of the magnitude observed in trees, and to pump water against large resistances and out of subsaturated, or partially dry, sources.

Besides supporting the theory of transpiration as a physical, not biological, process, the synthetic tree also introduces a new way to study water under tension -- a subject interesting to physicists and chemists. Many questions about the metastable state of water could be answered using this new "tree."

"Water is the most studied substance on Earth, and yet there is a big metastable region in its phase diagram waiting to be characterized," Stroock said. His lab is pursuing these studies with support from the National Science Foundation.

The capillary action used in trees might be applicable to developing new passive heat-transfer methods, Stroock said. The heat-transfer technology commonly used for cooling laptops, which uses vaporization to carry the heat to the fan on the edge of the computer, could be scaled up using the technology developed for the synthetic tree.

"It would be nice if you could, in a building, put these passive elements that carry heat around very effectively, for example, from a solar collector on the roof, to deliver heat all the way down through the building, then recycle that fluid back up to the roof the same way trees do it -- pulling it back up," Stroock said.

He also envisions the synthetic tree helping to build better soil remediation systems. Instead of having to soak contaminated soil to pump contaminants out, transpiration could help pull the contaminated fluid out of the soil without the use of more liquid. Similarly, the technology could also be used to draw water out of relatively dry soil without having to dig a well down to the water table.