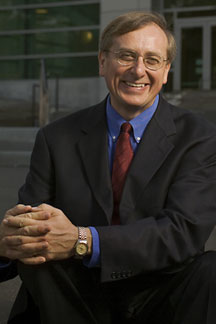 W. Kent Fuchs, the Joseph Silbert Dean of Engineering at Cornell since 2002, will be the university's next provost, President David Skorton announced today. Fuchs will assume the office Jan. 1, 2009.

Skorton made the announcement in his State of the University address at the annual meeting of the Cornell Board of Trustees and Cornell University Council in Statler Auditorium. "Kent brings to this post great knowledge of Cornell, strong leadership abilities and a clear vision of the future," he said.

In a prepared statement, Skorton said: "I am delighted that Kent Fuchs has accepted the challenge of being Cornell's next provost. He is a strong and respected administrator who has led the Engineering College with foresight, vitality and innovation -- attributes he will bring to his new appointment. I look forward to benefiting from his leadership and insight as Cornell's academic enterprise moves into an even brighter future."

Fuchs said: "I look forward to serving Cornell's faculty, students and staff, and working to fulfill President Skorton's vision for our campus. We are blessed with wonderful leadership across the university, and I will devote all my energy and time to helping those leaders enhance Cornell's stature, scholarship and teaching. The next few years are strategically important, and it is therefore a particular honor to be asked at this time to help guide the academic mission of our beloved Cornell."

As Cornell's 15th provost, Fuchs will succeed Carolyn (Biddy) Martin, who held the position for eight years -- the longest term for any provost in Cornell history -- before accepting the chancellorship of the University of Wisconsin-Madison in May.

In his State of the University address, Skorton praised Martin for her "distinguished leadership." He also thanked Deputy Provost David Harris "for serving so effectively as interim provost during the past several months." Harris will resume his deputy provost position Dec. 31.

At Fuchs' reappointment to a second term as engineering dean in 2006, Martin praised him for "strong and effective leadership"; calling him "a spectacular administrator [who] has made significant contributions to the quality and vitality of the college."

Under Fuchs' guidance, the College of Engineering initiated a collaborative strategic planning process to place the college in a position of international leadership. The plan led to the formation of a new Department of Biomedical Engineering, a revision of the undergraduate curriculum with new undergraduate majors in environmental engineering and -- in concert with the Faculty of Computing and Information Science -- in information science, systems and technology, and new graduate programs in engineering management and systems engineering. It also led to the creation of a teaching excellence institute and the completion of a comprehensive facilities master plan. Under Fuchs' deanship, the college also established a financial engineering master's program in Manhattan, a co-terminal degree program in France, and research and educational partnerships in China, India and Europe.

Before coming to Cornell in 2002, he had been head of the School of Electrical and Computer Engineering and a Distinguished Professor at Purdue University since 1996. From 1985 to 1996, he was a professor at the University of Illinois in the Coordinated Science Laboratory and the Department of Electrical and Computer Engineering.

An expert in dependable computing and failure diagnosis, Fuchs is a fellow of the Institute of Electrical and Electronics Engineers and of the Association for Computing Machinery. His research includes computer-aided design tools for testing and failure analysis in integrated circuits and dependable mobile computing.

Fuchs is a member of the executive board and a director of the American Society for Engineering Education's Engineering Deans Council and chair of the national Public Policy Committee. Fuchs was among the first faculty members to be appointed a University Scholar at the University of Illinois, where he also received the Senior Faculty Award for Excellence in Research. He was included in the "Incomplete List of Teachers Ranked as Excellent by Their Students" and named to the "Engineering College Advisers List," composed of the top 10 percent of the faculty selected as excellent undergraduate advisers by their students -- both also at the University of Illinois.

The provost is the university's chief academic officer and chief operations officer, and the president's first deputy officer. Duties include strategic planning and budgeting, tenure and promotion, academic and research initiatives, and academic oversight of the Ithaca campus.