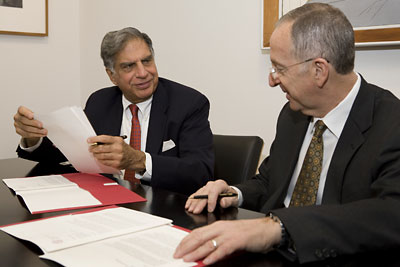 Robert Barker/University Photography
Alumnus Ratan Tata and President David Skorton after signing their historic agreement that will provide an endowment of $50 million to Cornell for agriculture and nutrition programs in India and for the education of Indian students at Cornell.

Cornell University has received an endowment of $50 million from the Tata Education and Development Trust, a philanthropic entity of India's Tata Group. The endowment consists of $25 million to establish the Tata-Cornell Initiative in Agriculture and Nutrition, which will contribute to advances in nutrition and agriculture for India; and $25 million for the Tata Scholarship Fund for Students from India, to help attract more of the best and brightest students to Cornell from India.

Ratan Tata '62, one of Cornell's most eminent alumni, is chairman of Tata Sons, the holding company of the Tata Group. Tata was named one of the 30 most respected CEOs in the world by Barron's magazine last year, and the Tata Group was awarded the Carnegie Medal of Philanthropy in 2007.

Cornell President David Skorton announced the gift during his State of the University address Oct. 17, calling it "one of the most generous endowments ever received from an international benefactor by an American university."

The Tata Group is one of India's oldest, largest and most respected business conglomerates, operating in seven business sectors and employing around 320,000 people. The Tata Education and Development Trust's primary objectives include promoting the acquisition of knowledge by Indian youth in leading global academic institutions and aiding research in agriculture and nutrition.

In a prepared statement, Skorton said of the gift: "Cornell is a better place thanks to its long-standing academic and research connections to India, through our faculty and researchers and, most especially, our students. This visionary gift sets a new course that befits the history of our partnership with India and the needs of the new century. With the Tata Scholarship Fund for Students from India, Cornell will be able to welcome many more of the best and brightest Indian students in a manner that would make Ezra Cornell proud, that is regardless of their financial circumstances. And, building on the remarkable achievements in India throughout the better part of the past century, the Tata-Cornell Initiative in Agriculture and Nutrition will increase collaboration among Indian and Cornell scientists and students in nutrition and agriculture to improve the livelihoods and nutritional status of the rural poor in India."

The goal of the new agriculture initiative is to improve the productivity, sustainability and profitability of India's food system, with the aim of reducing poverty and malnutrition, said Alice Pell, Cornell vice provost for international relations.

Record high food prices, dietary changes, climate change and increasing energy costs underscore how changes in the food system affect the poor. Although Cornell already has numerous successful public/private partnerships in both agriculture and nutrition in India, the gift will extend existing relationships and permit development of new initiatives, according to Pell.

Cornell's long-standing expertise in international agriculture and nutrition will receive a significant boost through Tata's gift, Pell said. Her office will work with an advisory board, to be co-chaired by Tata and Skorton, to decide the type and scope of initiatives to be undertaken, she said.

"Although the Tata funds will be used to address problems in rural India, the gift will also help us learn how universities can better contribute to development and poverty reduction in other parts of the world," Pell said. And, as a longtime faculty member who has worked in these areas, Pell also expressed gratitude for the "fantastic opportunities" that such a gift will provide for students and researchers.

The establishment of the $25 million scholarship fund will help meet the Tata Group's pledge to bring more Indian students to Cornell. The scholarships will be offered to between six and 10 students annually, depending on level of need, and could ultimately support up to 25 Tata scholars at Cornell at any one time.

The university's entire endowment for international financial aid is about $1.5 million per year, which covers about a dozen new students a year from outside the U.S., Canada and Mexico, and is often allocated for students from specific parts of the world, according to Doris Davis, Cornell's associate provost for admissions and enrollment.

After being in India meeting prospective students last year, Davis recalled: "I met so many bright, talented students who would make such a contribution to Cornell. Now I can go back and tell the Cornell story with this added information -- not only is Cornell committed to admitting students from India, but now we have the resources to help students who want to attend Cornell with their financial needs."

Tata's scholarship gift comes on the heels of a new Cornell financial aid initiative that took effect this semester. About 4,500 undergraduates are already benefiting from the plan, which greatly reduces the amount of loan debt for students from families with certain income levels. The plan covers qualifying students from the United States, as well as Canadians and Mexicans, but does not cover other international students.

The Tata scholarships will be increased to the optimal number over three or four years. During that period, Cornell will launch an extensive outreach campaign in India to build awareness of the scholarships.