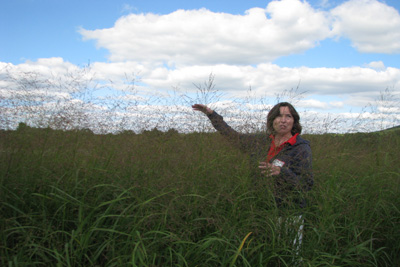 Lauren Chambliss
Extension associate Hilary Mayton discusses the future of bioenergy in the Northeast in a field of switchgrass Sept. 10.

Talk about a field of dreams. Cornell bioenergy plant experts are learning which field grasses are the best candidates for "dedicated energy" crops in the Northeast, considering the region's climate and soil conditions.

The experts hosted their first field day Sept. 10 to give farmers, government officials, extension educators and researchers the opportunity to view stands of tall grasses that represent the future of bioenergy in the Northeast.

The College of Agriculture and Life Sciences' (CALS) Bioenergy Feedstock Project, now in its second year, is the only project of its kind devoted to exploring the many species of field grass that grow in the Northeast and their potential as sources for biofuels.

The project has roughly 80 acres of different warm- and cool-season perennial grass varieties, otherwise known as "feedstocks," growing in 11 counties across New York. "Our ultimate goal is to maximize the economic benefit of bioenergy production as an alternative energy source," said Donald Viands, professor of plant breeding and genetics, who heads the project, speaking against a colorful backdrop of a field of blue, green, lavender and beige hues, where some plants were withering, but some were some thriving. 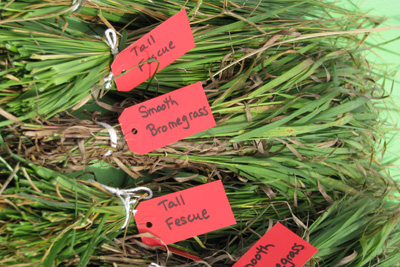 Switchgrass, big bluestem and other wild grasses native to the United States have great potential for producing the quantity and quality of biomass needed for conversion to alternative, renewable energy, particularly biofuels, Viands said. The grass project will eventually provide farmers and producers with answers to such critical questions as which varieties of grasses to plant, appropriate seeding rates, weed control and other best-management practices to produce "quick, cheap" sugars that can be most easily liberated from the plant biomass and converted to fuel.

Hilary Mayton, extension associate and coordinator of the project, said that of the 12 varieties of switchgrass planted, some are showing a distinct advantage over others. Visitors saw how some strips of these warm-season grasses appeared stunted and unhealthy, while others were tall and vibrant. Julie Hansen, a Cornell plant breeding and genetics senior research associate, discussed trials on cool-season grasses, such as tall wheat grass and tall fescue, some of which are now commonly grown for feeding livestock.

When the small plots and strip trial demonstration grass trials are harvested later this year, Mayton and her Cornell and private company collaborators will obtain data for both gasification (heat, power and liquid fuels) and cellulosic conversion technologies (biofuels and other byproducts) from the different types of grasses.

In the wild, many of these native perennial grasses can survive, and even thrive, on marginal land. Some of the Cornell trials were specifically planted on land that is not suitable for such domesticated, monoculture food crops as corn.

Paul Salon, a plant material specialist with the Natural Resources Conservation Service of the U.S. Department of Agriculture who is working closely with Cornell on the project, noted that the close proximity of agricultural land to major population and transportation centers in the Northeast makes this region ideal for developing bioenergy crops and industrial byproducts, which is why so much is riding on these fields of mixed greens.

The project is funded by the New York Farm Viability Institute, CALS and the Cornell Agricultural Experiment Station.

Lauren Chambliss is a communications specialist with the Cornell Agricultural Experiment Station in Ithaca.