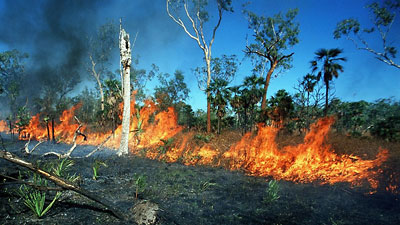 A detailed analysis of black carbon -- the residue of burned organic matter -- in computer climate models suggests that those models may be overestimating climate change predictions.

A new Cornell study, published online in Nature Geosciences, quantified the amount of black carbon in Australian soils and found that there was far more than expected, said Johannes Lehmann, the paper's lead author and a Cornell professor of biogeochemistry. The survey was the largest of black carbon ever published.

As a result of global warming, soils are expected to release more carbon dioxide, the major greenhouse gas, into the atmosphere, which, in turn, creates more warming. Climate models try to incorporate these increases of carbon dioxide from soils as the planet warms, but results vary greatly when realistic estimates of black carbon in soils are included in the predictions, the study found.

By entering realistic estimates of stocks of black carbon in soil from two Australian savannas into a computer model that calculates carbon dioxide release from soil, the researchers found that carbon dioxide emissions from soils were reduced by about 20 percent over 100 years, as compared with simulations that did not take black carbon's long shelf life into account.

"We know from measurements that climate change today is worse than people have predicted," said Lehmann. "But this particular aspect, black carbon's stability in soil, if incorporated in climate models, would actually decrease climate predictions."

"It's a mistake to look at soil as one blob of carbon," said Lehmann. "Rather, it has different chemical components with different characteristics. In this way, soil will interact differently to warming based on what's in it."