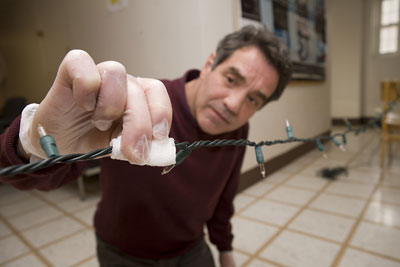 With the holiday season approaching, a Cornell environmental analyst has made an illuminating discovery: Many Christmas light sets contain such high levels of lead that they exceed limits set by the U.S. Environmental Protection Agency (EPA) and the Department of Housing and Urban Development (HUD) for windowsills or floors.

"Whether exposure to lead in Christmas lights affects blood lead levels in humans is unknown, though research increasingly shows that any exposure to lead -- especially by children -- is hazardous to health in that it is implicated in a wide range of health concerns," said Joseph Laquatra, a professor of design and environmental analysis in Cornell's College of Human Ecology, who led the study. "No standards exist for lead content in this product, and no protocols exist for conducting tests on it."

The study, conducted with Lelia M. Coyne, a chemist and certified lead risk assessor in Lincoln, Neb., and Mark R. Pierce, a Cornell extension associate in Laquatra's department, is published in the December issue of the Journal of Environmental Health (71:5).

Researchers tested the lead levels of 10 sets of indoor/outdoor Christmas lights, some recently purchased in Nebraska and New York, others from the 1970s. The researchers found detectable levels of lead in all of them; and all were above EPA/HUD regulatory limits for equivalent areas of windowsills and floors. They also found no significant differences in lead levels among manufacturers, year of purchase, or how many years the lights had been used.

Lead is used in the polyvinyl chloride (PVC) jacketing of the Christmas light cords, said Laquatra, to prevent them from cracking or crumbling and to make them resistant to heat, light and moisture damage. Lead makes up 2-5 percent of PVC jacketing in different types of wires, he said.

"While some products are starting to have warning labels, there is no coordinated drive to encourage manufacturers to pursue alternatives," Laquatra said.

"Consumers should be aware that lead is in all appliance cords," he said, noting that although American manufacturers have been moving away from using lead as a PVC stabilizer in the last five years, at present there is no way to know how much lead exists in jacketing or in various products without independent testing.

When it comes to Christmas lights, the researchers pointed out that lead could be ingested from hand-to-mouth contact after handling the lights; lead also can be released into the air during installation and removal.

The researchers recommend that children not handle Christmas lights, and that anyone who does, should wash their hands immediately after handling. As for other appliance cords, "consumers may wish to exercise caution to reduce possible exposure," Laquatra said.