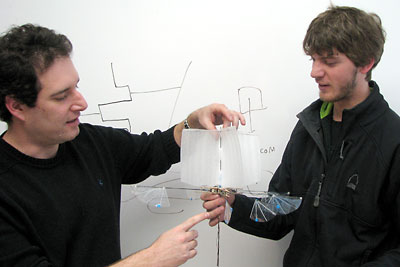 Since the days of Leonardo da Vinci people have tried to build machines that fly with flapping wings like a bird or an insect. Even in the jet age the idea remains attractive because such machines could be more maneuverable than fixed-wing aircraft, and at small sizes would use less energy to hover than helicopters.

Many of these so-called "ornithopters" have been built. Some of them fly well when moving forward, but so far, few do a good job of hovering in place. Our computers still can't match the complex feedback and control systems in the tiny brains of birds and bugs.

But Cornell researchers have come up with a simple, inexpensive flapping wing vehicle that hovers as well as a hummingbird or a bumblebee -- and might eventually be made just as small. Potential applications include surveillance, artificial pollination and even toys.

The vehicle -- built by students Floris Van Breugel and William Regan, working with Hod Lipson, Cornell associate professor of mechanical and aerospace engineering -- needs no complex control system because it is "passively stable." Tip it over and it naturally rights itself like a buoy in water. It can even be started upside down and will recover, something few conventional aircraft, including helicopters, can do. The device is described in an article in the December 2008 issue of IEEE Robotics & Automation Magazine. 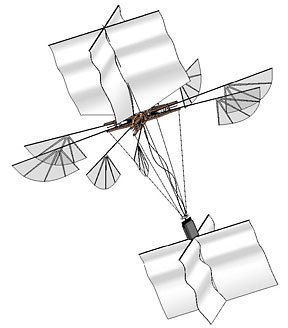 Provided/Lipson Lab
Four sets of small flapping wings and stabilizing sails give the vehicle the ability to right itself from any position, something even helicopters can't do.

The prototype, about 2 feet high, uses four pairs of flexible flapping wings arranged at the corners of a box-kite-shaped stabilizing sail, driven by tiny rotary motors that move bent crankshafts to produce a flapping motion. The wings are made of thin polyethylene film stretched over a veined plastic frame of slightly thicker polyethylene, not unlike the structure of many insect wings. The wings are attached by carbon fiber rods that flex to increase the length of each flap and store elastic energy like springs. With a body made of laser-cut balsa wood and packing foam, the vehicle weighs just 24.2 grams (a bit less than one ounce), including batteries.

The design is highly scalable, according to Lipson, and the next step will be to make smaller versions, perhaps down to fly size, where motors might be replaced by piezoelectric actuators.

It was once a standing joke that according to aerodynamic theory bumblebees can't fly. What this really meant was that the theory needed to be refined, and a number of scientists have been working on it, allowing for the complex vortices that form at the leading and trailing edges of insect wings as they move both up and down and forward and back. Studies of live insects have shown that their wings change shape as they move to take advantage of these effects. Van Breugel took all this into account in his design, creating flexible wings with a carefully tailored shape that warps through the flapping cycle in response to air pressure and inertia to get maximum lift with minimum battery power.

Along with practical applications of the technology, the researchers said they hoped the work would provide further insight into the mechanisms underlying the flight of insects and hummingbirds.