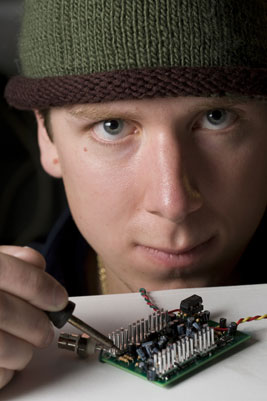 A prototype of a therapeutic ultrasound device, developed by a Cornell graduate student, fits in the palm of a hand, is battery-powered and packs enough punch to stabilize a gunshot wound or deliver drugs to brain cancer patients. It is wired to a ceramic probe, called a transducer, and it creates sound waves so strong they instantly cause water to bubble, spray and turn into steam.

Tinkering in his Olin Hall lab, George K. Lewis, a third-year Ph.D. student in biomedical engineering and a National Science Foundation fellow, creates ultrasound devices that are smaller, more powerful and many times less expensive than today's models. Devices today can weigh 30 pounds and cost $20,000; his is pocket-sized and built with $100. He envisions a world where therapeutic ultrasound machines are found in every hospital and medical research lab.

"New research and applications are going to spin out, now that these systems will be so cheap, affordable and portable in nature," Lewis said.

The development of one of his portable devices is detailed in the journal Review of Scientific Instruments (79-114302), published online Nov. 11. Lewis, whose paper is co-authored by his adviser, William L. Olbricht, Cornell professor of chemical and biomolecular engineering, also presented his research in a talk at the November meeting of the Acoustical Society of America. 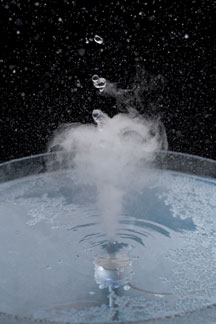 Robert Barker/University Photography
Ultrasound waves created by one of Lewis' devices leave the transducer, submerged under water, causing the water to bubble, spray and turn into steam.

Ultrasound is commonly used as a nondestructive imaging technique in medical settings. Sound waves, inaudible to humans, can generate images through soft tissue, allowing, for instance, a pregnant woman to view images of her baby. But the higher-energy ultrasound that Lewis works with can treat such conditions as prostate tumors or kidney stones by breaking them up. His devices also can relieve arthritis pressure and even help treat brain cancer by pushing drugs quickly through the brain following surgery.

Lewis suggests that his technology could lead to such innovations as cell phone-size devices that military medics could carry to cauterize bleeding wounds, or dental machines to enable the body to instantly absorb locally injected anesthetic.

Lewis miniaturized the ultrasound device by increasing its efficiency. Traditional devices apply 500-volt signals across a transducer to convert the voltage to sound waves, but in the process, about half the energy is lost. In the laboratory, Lewis has devised a way to transfer 95 percent of the source energy to the transducer.

His new devices are currently being tested in a clinical setting at Weill Cornell Medical College. Under the direction of Jason Spector, M.D, director of Weill Cornell's Laboratory for Bioregenerative Medicine and Surgery and assistant professor of plastic surgery, Peter Henderson, M.D., the lab's chief research fellow, is using one of the devices in experiments that aim to minimize injury that occurs when tissues do not receive adequate blood flow.

Their lab is performing tests in animals to determine whether low doses of the chemical hydrogen sulfide, known to be toxic at high doses, might be able to minimize such injury by slowing cellular metabolism.

Doctors are hopeful that the ultrasound from Lewis' portable device will enable hydrogen sulfide to be targeted to specific parts of the body, allowing doctors to use less of it, and cutting down on toxicity risks, Henderson explained.

The medical doors that Lewis' device may one day open are groundbreaking, Henderson said.

"People are realizing that when harnessed appropriately, you can use ultrasound to treat things as opposed to just diagnose them," Henderson said. "It's a wide-open field right now, and George's device is going to play a huge role in catalyzing the discovery of new and better therapeutic applications."