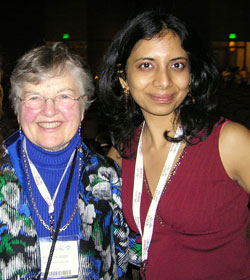 The award, named for an IBM fellow emeritus, includes a $30,000 grant to Cornell to encourage participation of women in engineering and computer science, according to the award letter. Anandkumar accepted the award at an October ceremony.

A student in professor Lang Tong's Adaptive Communications and Signal Processing Group in the School of Electrical and Computer Engineering, Anandkumar studies areas of inference on graphical models, networking and information theory.

Anandkumar was the winner of the Student Paper Award at the 2006 International Conference on Acoustic, Speech and Signal Processing. She is currently a visiting graduate student at the Laboratory for Information and Decision Systems at the Massachusetts Institute of Technology. Anandkumar received her B.Tech. degree from the Indian Institute of Technology Madras, Chenai, India in 2004.

Attracting and supporting more women into her field is "hugely important" to Anandkumar.

"Although I have really good role models and a support system, I have heard from many women students that they could use a little more help or mentorship in the very beginning, when it's most needed," she said. "In that aspect maybe this award will help toward achieving that."

The School of Electrical and Computer Engineering has brainstormed a long list of ideas of how best to use the grant, said Clifford Pollock, school director. Among them: travel grants for technical conferences, sponsorship of high-profile speakers, industry and academic field trips, panel discussions, workshops and social events.