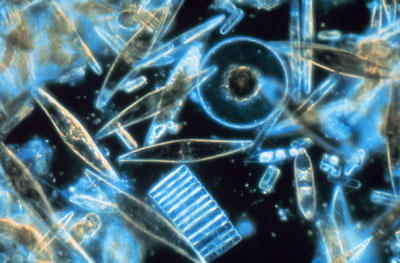 Professor Gordon Taylor/Stony Brook University
Diatoms are abundant oceanic plankton that remove billions of tons of carbon dioxide from the air each year. Their evolutionary history needs to be rewritten, according to a new Cornell study.

The evolutionary history of diatoms -- abundant oceanic plankton that remove billions of tons of carbon dioxide from the air each year -- needs to be rewritten, according to a new Cornell study. The findings suggest that after a sudden rise in species numbers, diatoms abruptly declined about 33 million years ago -- trends that coincided with severe global cooling.

The study is published in the Jan. 8 issue of the journal Nature.

The research casts doubt on the long-held theory that diatoms' success was tied to an influx of nutrients into the oceans from the rise of grasslands about 18 million years ago. New evidence from a study led by graduate student Dan Rabosky of Cornell's Department of Ecology and Evolutionary Biology and the Cornell Laboratory of Ornithology takes into account a widespread problem in paleontology: that younger fossils are easier to find than older ones.

"We just tried to address the simple fact that the number of available fossils is colossally greater from recent time periods than from earlier time periods," Rabosky said. "It's a pretty standard correction in some fields, but it hasn't been applied to planktonic paleontology up till now."

The dearth of early fossils is understandable. Sampling for diatom fossils requires immense drill ships to bore into seafloor sediment. To find an ancient fossil, scientists first have to find ancient sediment -- and that's no easy task because plate tectonics constantly shift the ocean floor, fossils and all. Much of the seafloor is simply too young to sample.

So Rabosky and co-author Ulf Sorhannus of Edinboro University of Pennsylvania controlled for how many samples had been taken from each million-year period of the Earth's history, going back 40 million years. After reanalysis, the long-accepted boom in diatoms over the last 18 million years disappeared. In its place was a slow recent rise, with a much more dramatic increase and decline at the end of the Eocene epoch, about 33 million years ago.

"If there was a truly significant change in diatom diversity at all, it happened 30 million years ago," Rabosky said. "The shallow, gradual increase we see is totally different from the kind of exponential increase you would expect if grasslands were the cause."

As an example of that kind of increase, Rabosky turned to another fossil record: horse teeth. Before grasslands, horses had small teeth suited for chewing soft leaves. But as grasslands appeared, much hardier teeth appeared adapted to a lifetime of chewing tough, silica-studded grass leaves. Diatoms ought to show a similar evolutionary response to the sudden availability of silica, Rabosky said, but they don't.

Although the new results don't explain the current prevalence of diatoms in the ocean, Rabosky said that whatever led to diatoms' rise at the end of the Eocene, the tiny organisms may have contributed to the global cooling that followed.

"Why diatom diversity peaked for 4 to 5 million years and then dropped is a big mystery," Rabosky said. "But it corresponds with a period when the global climate swung from hothouse to icehouse. It's tempting to speculate that these tiny plankton, by taking carbon dioxide out of the air, might have helped trigger the most severe global cooling event in the past 100 million years."

The research was supported in part by the National Science Foundation.

Hugh Powell is a science writer at Cornell's Lab of Ornithology.